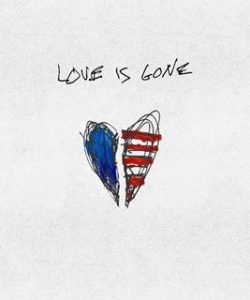 June 12, 2020 – Multi-platinum selling rapper, producer, activist, and philanthropist, G-Eazy has released a visual for the new version of his song “Love Is Gone” from his album The Beautiful & Damned.

The latest version of the song, which was originally released in 2017 featuring Drew Love, includes a new verse from rising California rapper JAHMED and finds G rapping through striking verses that evoke images of American discord, racism and police brutality.

Released with a powerful visual comprised of on the ground footage from protesters nationwide, the song takes on more meaning today. Listen HERE. Watch HERE.

Shit, the world is in flames
We worry ’bout materials and the simplest things
When cops are killing people, then they can’t take the blame
They get acquitted, then you wonder why all the people rage, stupid
We all keep praying for peace, praying for progress

“I wrote “Love Is Gone” in the Summer of 2016…Fast forward 4 years later, and the same racial injustices are still happening day after day in our country. The fight against inequality is as important as ever. This is more than just a song to me, it’s a message… All lives can’t matter until #BLACKLIVESMATTER. Big love to my fam Drew Love and to JAHMED for blessing it with a new verse with some thoughts of his own.” – G-Eazy

“Music is critical right now with everything that’s going on… it’s important that as artists we really utilize our platforms to the fullest extent. A lot of people don’t even make an effort to understand what’s going on, but if they see a name like G-EAZY attached to it they’ll pay attention. I’m honored to be a part of such a powerful record and to have this opportunity to get this message to my people.” – JAHMED

G-Eazy has always used his platform to speak out against racial inequality, notably appearing on the remix of “Fuck Donald Trump” with YG and Nipsey Hussle in 2016.

For the next month, G-Eazy will be donating ALL profits from merch sales to MBK Alliance, Campaign Zero, and Color of Change and has called on all artists to join him in donating what they can. Additionally, the rapper will be donating 20,000 masks to the Bay Area in partnership with Genies and Bella Canvas. Lyft has also partnered through their LyftUp initiative to help execute the deliveries of the masks. 15,000 masks will support people on the frontlines of the Black Lives Matter protests and 5,000 masks will support essential workers for COVID-19.