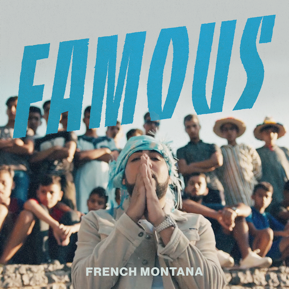 Directed and shot by the acclaimed Director X and French Montana, the cinematic visual depicts French as he goes home to Morocco.  French partnered with Samsung to bring life to the video which explores the magic of the country and nuances of its culture as he introduces an overview of this inspiring landscape. Meanwhile, the simmering beat, slight North African twang, and unshakable chant—“I’ll always love you”—comprise the perfect soundtrack to these real moments in the artist’s life.

It also amplifies awareness of his growing philanthropic efforts across the globe. During the production of “Famous,” he met with dignitaries and politicians in order to further humanitarian change in the country. Right now, he’s diligently working on implementing a social initiative to benefit Morocco similar to his recent success in Uganda.

Joining forces with Sean “Diddy” Combs and The Weeknd, French impressively raised over $500,000 to benefit the Suubi Health Center in the community of Budondo. The Center services a community of over 300,000 people in need. As a result of this donation, the establishment now includes new staff quarters, a birthing house, and a prenatal care clinic, while salaries have been paid!

Moreover, French ignited the start of another project, breaking ground on the brand new Suubi Hospital—details forthcoming. View the Urganda progress in this video and a “thank you” from the women. In a Christmas PSA, Diddy excitedly matches the $100,000 raised with a contribution of his own in time for the holidays. French began his philanthropic journey in March of 2017 in Uganda advocating for child and maternal health. He’s now ready to begin the PanAfrican Movement by going next to his hometown of Casablanca, Morocco working with CARE Morocco to ensure children of Casablanca have access to a quality education and healthcare. His first initiative will be to equip a local school in Morocco with computers, books, teacher training, and an arts program. Morocco is personal to him so he would like his fans to take actions at GlobalCitizen.org to join the movement.

Just this week, French delivered a standout performance of “Famous” on the Tonight Show Starring Jimmy Fallon. He took over the stage with undeniable charisma and charm. Watch it HERE.

“Famous” remains primed to take off. The GRAMMY® Award-nominated multiplatinum rap icon, influencer, and philanthropist set the stage for the success with last year’s blockbuster smash “UNFORGETTABLE” [feat. Swae Lee]. Not only did the track generate over 1 billion worldwide streams, but it also earned a quadruple-platinum certification from the RIAA.

“Famous” ignites 2018 as French’s incredible journey continues in inspiring improvements for healthcare and education for humanity.