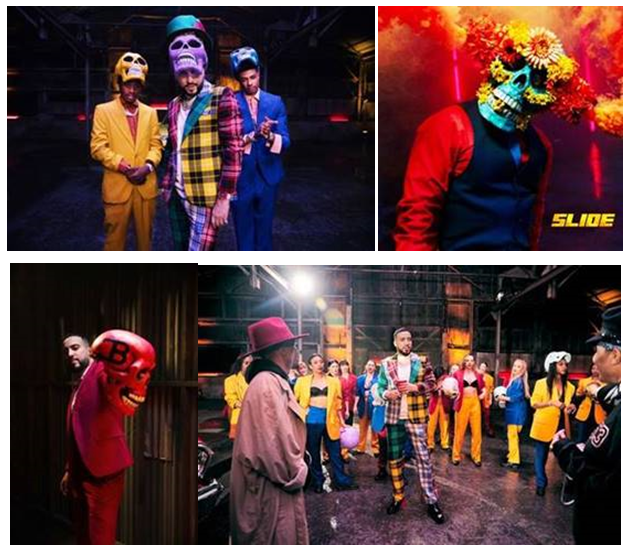 Once again, he drops an event-level blockbuster, joining forces with two of the game’s hottest young talents. French taps into a high-energy cadence, sliding into the pocket with style. Meanwhile, 17-year-old Bronx phenomenon Lil TJay turns up with fresh East Coast fire. Southern California star and West Coast viral disruptor BLUEFACE shows up for a scene-stealing and meme-able cameo with no shortage of personality. It has all the ingredients of a summer smash…

A movie-style music video shot on-location in South Central makes its debut on VEVO/YouTube today. With style and pops of color inspired by Mexico’s Day of the Dead and Dick Tracy in equal measure, the visual unfurls as a psychedelic O.G. odyssey complete with shiny skull heads and monochromatic Al Capone-era suits. It sets the scene for these three stars to drop into the “slide” dance, which will undoubtedly transform into a phenomenon of its own.

BET Jams will debut the video on-air beginning at 9am ET, spinning it every hour on the hour. Additionally, they will display it in Times Square on their billboard-located on the side of the Viacom building.

Breaking the mold yet again, French performed “Slide” for the first time on Tuesday’s episode of NCIS: New Orleans. Tune in to CBS to catch this high-octane performance bookended by 2018’s smash “No Stylist” on-demand.

Get ready to “Slide” with French Montana this summer as he readies his new album for release soon.

Some artists blur genres, but French Montana blurs borders. His inimitable fusion of classic East Coast rhymes, wavy pop swagger, and international ambition elevated him to the forefront of the game on a global scale. 2017 saw him ascend to superstar status with the blockbuster smash “UNFORGETTABLE” [feat. Swae Lee], which cemented him in the “Billion Club” for streaming and earned a quintuple-platinum certification from the RIAA and an even higher 9x platinum certification by Music Canada (broaching DIAMOND certification). Meanwhile, his sophomore effort, JUNGLE RULES, went gold in the U.S., certified platinum in Canada, and dominated the charts in both countries. At the same time, he has left an indelible mark on communities around the globe. In addition to becoming the very first rap ambassador of Global Citizen, he staunchly supported humanitarian efforts, spanning DACA, the viral Mama

If anyone can not only change music, but the world at large, it’s French Montana.

FOR UP TO DATE INFO REGARDING FRENCH MONTANA, PLEASE VISIT: