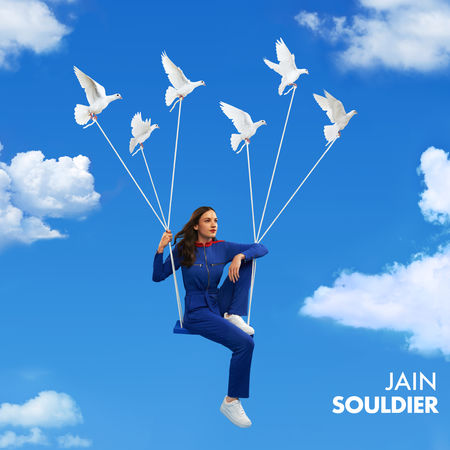 Produced by Jain and Maxim Nucci (who also produced her debut album Zanaka), the album was recorded in Paris, France. Souldier includes lead single “Alright,” now with over 5M+ views worldwide, as well as “Oh Man,” of which the lyric video (directed by Montréal studio Moment Factory) has been released today. See full tracklisting and upcoming North American tour dates below.

ABOUT SOULDIER, IN HER OWN WORDS

“Souldier is an album which was written on the road, crossing various countries and inspirations during its time of writing. I wanted to release it as quickly as I could, to make sure it resembled me as much as possible. Having mostly highlighted my teenage years and Congolese rumba on “Zanaka”, this time around I wanted to show a bit more of myself. The aim was to broaden my influences, both those from my childhood and my current ones. I’m a big fan of Kendrick Lamar’s flow, Tito Puente’s softness, Fairuz’ elegance and Bob Marley’s melodies and, amongst all this music that I so love, I tried to find my own. That’s how Souldier was born, of the desire to combine what I like, and of the desire to talk of both timeless and contemporary subjects. For this, I was lucky enough to work with a team of incredible music-lovers with great musical knowledge, with my manager as well as with the great musician and artist Maxim Nucci.” – JAIN

As the daughter of a family of expats, Jain spent a significant part of her youth living in Pointe-Noire, in the Congo. Nourished by her parents’ swing influences, from Aretha Franklin to Janis Joplin and Otis Redding, Jain started playing the guitar and drums at a young age before moving on to writing her own songs. Her high school friends soon introduced her to a young man who would help her with her first recordings: “Mister Flash”, a rumba aficionado well acquainted with the Pointe-Noire live music scene, who gave Jain access to the extensive studio equipment he had available in his home. As Jain puts it, “My parents’ soul music and the years I spent in Africa are a big part of who I am, which is why my music has always been so colorful.”

She left Africa shortly after, following her parents on the road to discover the United Arab Emirates and their capital Abu Dhabi. There, she mastered oriental percussions and broadened her span of influences, largely thanks to Ferouz’ legendarily grand Arab vocals. Above all, through crossing the cultures and borders of Africa and the East, Jain developed her understanding and consciousness of the world. “My youth was disconcerting, I saw things that confronted me with the world I live in and all its differences,’ she explains, ‘this helped me keep a cool head later on.”

Upon arriving in Paris, Jain met producer Yodelice who signed her to his label Spookland, combining their individual experiences to give birth to her debut album. “Zanaka” means “son” in Malagasy, and embodies all of the enthusiasm, delicateness and knocks Jain experienced in those sunny countries that had shaped her life up to that point. A heartfelt diary of ten songs, of which the famous “Makeba” and its potent celebration of Africa.

Released in 2015, her triple-platinum debut album even bagged Jain a Victoire de la musique (French Grammy equivalent) for Best female performer in 2017, and a subsequent nomination at the New York Grammy Awards in 2018. Since “Zanaka”’s release, Jain has been spending an ever-growing amount of time on the road, playing over 200 shows across the world, most recently to the applause of 30,000 people at France’s Vieilles Charrues Festival. Jain is about to set off on her second North American tour, 2 years after she first introduced her music to crowds from Nashville to L.A. and New York, positioning herself as one of the biggest French artists to cross the Atlantic.

All new experiences that have led the young French woman back to the studio – “to a breath of fresh air” she simply puts it. With Yodelice still at her side, Jain has spent the past months creating her sophomore album, displaying further yet her amorous passion for rhythm. Of course, Africa is once again the heart of the album, most noticeably so on “Oh Man”, alongside Malian kora Sidiki Diabaté, son of the legendary Toumani. “That said, I also wanted to evolve,’ adds Jain, ‘to go beyond what I’ve been for so long. This time round you can expect much more diversity and variety.”

With “Souldier”, a now 26-year-old Jain has taken her exploration even further, driven by her insatiable curiosity for the world, its diversity and, most of all, its differences.