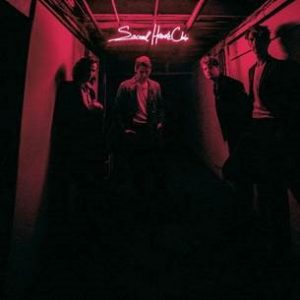 Foster the People has announced that its forthcoming third album, Sacred Hearts Club, will be released on July 21 via Columbia Records. The 12-track album is available for pre-order now HERE and will be available physically, digitally and on vinyl. Fans who pre-order the album will receive instant downloads of lead single “Doing It For The Money”, which has reached Top 15 at Alternative Radio, “Pay the Man” and “SHC,” which were all recently revealed as a bundle entitled III. The band has also unveiled a brand new merch store today featuring special packages that include the new album. See full album track list below.

In celebration of the album, Foster the People has also premiered a brand new video, “Sacred Hearts Club (the beginning).” The documentary style video gives fans a behind-the-scenes look at the band’s rehearsals as they geared up for their most recent run of U.S. tour dates. Check out the video HERE.

Having just wrapped up a spring tour where they gave fans a taste of what to expect from the new record, the band has also announced a new set of fall tour dates. The fall tour will kick off September 2 with a headline slot for 94/7 Alternative Portland’s “Best Show Of The Year…So Far…” and will stop in major markets including Denver, Boston and Atlanta before wrapping with an appearance at the Austin City Limits music festival on October 13. Tickets for the fall tour will be on sale to the public starting Friday, June 16 at 10 AM local time in most markets. For additional tour and ticket information please visit www.fosterthepeople.com. Additional dates to be announced soon.

In addition to Austin City Limits, the band is set to play the music festival circuit with confirmed performances at WayHome in July, Osheaga and Lollapalooza in August and The Meadows Music and Arts Festival in September – see full list of tour dates at www.fosterthepeople.com.

Founded in in 2009, Foster the People achieved success with the 2011 release of its debut album Torches, which has sold nearly two million albums and over nine million singles worldwide. Torches features the #1 hit single “Pumped Up Kicks,” which was declared “the year’s anthem” by SPIN, and also spawned the chart topping singles “Don’t Stop (Color On The Walls),” “Houdini,” and “Helena Beat.” Foster the People garnered three Grammy nominations for its monumental debut, including Best Alternative Album, Best Pop Duo/Group Performance for “Pumped Up Kicks” and Best Short Form Music Video for “Houdini.” Supermodel was the second full-length record from Foster the People. Influenced by frontman Mark Foster’s world travels and shifting perspective, the album was recorded in studios around the world and features fan favorites including “Coming of Age” and “Best Friend.”