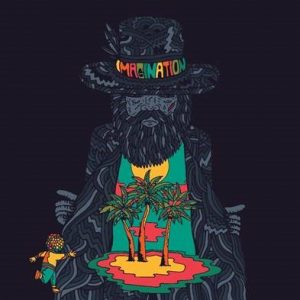 Speaking about the song, front man Mark Foster says, “I think the quality that makes us distinctly human is our ability to live in duality. We comprehend the present external world we’re in, while having an internal dialogue about what it all means. We can be our own best friends. We can be our own mortal enemy. We can ski the Alps in the peak of summer from under our bed covers at night. We can sail the high seas with Yeats and pick his brain about the afterlife in the holy city of Byzantium. We can fall in love with a stranger that passes us on the street, forming a complete history and future with a person we’ve never even spoken to.”

“Our internal life is a universe, worthy to be explored and engaged. A dangerous place full of desires, undiscovered and unfulfilled. In our imagination we can escape our reality and create a new one.

Fans can watch for the official “Imagination” music video to come soon. The video will be latest to showcase Mark Foster as a director, following the official videos for “Style” and “Worst Nites,” which was his directorial debut.

The new music comes on the heels of Foster the People’s massive hit “Sit Next To Me,” which was described as “pure shimmering pop” by The Associated Press and named one of Billboard’s “Best Songs of 2018.” At radio, the song hit #3 at U.S. Alternative (top 15 in Canada), #19 at Top 40 and reached Top 10 at both AAA and Adult Pop. The track also received a nomination for “Choice Rock/Alternative Song” at the 2018 Teen Choice Awards, where the band performed the song live following appearances on The Tonight Show starring Jimmy Fallon and The Late Late Show with James Corden.

Foster the People rose to the forefront with the 2011 release of their debut album Torches, which has sold nearly two million albums and over nine million singles worldwide. Torches features the #1 hit single “Pumped Up Kicks,” which was recently named one of USA Today’s “100 Absolute Best Songs in History.”

Check out https://www.fosterthepeople.com/ for updates and additional info.