“THE MAKING OF CONCRETE AND GOLD” ANIMATED DOCUMENTARY LIVE AT  http://smarturl.it/FFAnimation 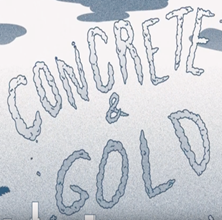 12 HOURS OF THE WORLD’S BEST LIVE ROCK N ROLL Including QUEENS OF THE STONE AGE, CAGE THE ELEPHANT, LIAM GALLAGHER, THE KILLS, ROYAL BLOOD & MANY MORE

(Toronto, ON) One surprise summer rock anthem coupled with a video of the band doing the senior citizen time warp, one extraterrestrial opus complete with floating children, and one “search for hope in this day and age where you feel as if you’re fighting for your life with every passing moment, and everything is on the line” and now finally…

… 2017’s most massive and ambitious rock n roll opus has arrived: September 15 is here and so is Foo Fighters’ all new ninth studio album Concrete and Gold, released on this day A.D. Roswell Records/RCA Records.

Written and performed by Foo Fighters, produced by Greg Kurstin and Foo Fighters, and mixed by Darrell Thorp, Concrete and Gold is eleven songs that push Foo Fighters’ melodic and hard rock extremes like never before—and early critical notices have been fittingly over the top, shaping up to be the most positive of Foo Fighters’ monolithic career:

“There are some real impactful sun-through-the-clouds harmonies all across the album, reminiscent of Abbey Road’s choir-like accents that made weightless rock songs with real meat on their bones… the best Foo Fighters album of this century… Perhaps we have a few superheroes left above ground after all.”—STEREOGUM

“This is thrilling, heroic rock.”—ASSOCIATED PRESS

“Rock’s reigning kings get an infusion of power and pop… The Foos go for more artistically than they have in years and succeed every time.”—NEWSDAY

“One of the true landmark albums set to drop this fall.”—UPROXX

“All the gems are hidden in plain sight… Their sound doesn’t age… there’s no one else like them anymore: They’re a mainstream of one.”—VULTURE

Concrete and Gold’s arrival was most recently heralded by the straightforward FF signature burner “The Line.” Prior to that, “The Sky Is A Neighborhood” was visually realized as a Grohl-directed kaleidoscopic sci-fi mini-epic as hypnotic as the slow burning rock stomper that gave it life. The run-up to Concrete and Gold began just as auspiciously, with the June 1 surprise release of the Billboard Mainstream Rock #1 smash “Run.” With more than 2 million YouTube views in its first 24 hours, “Run” rocketed into the top 5 of the iTunes video chart and the top of the 15 iTunes singles chart—quickly amassing the highest first-day numbers of any single in the Foo Fighters’ career.