12 HOURS OF THE WORLD’S BEST LIVE ROCK N ROLL Including QUEENS OF THE STONE AGE, CAGE THE ELEPHANT, LIAM GALLAGHER, THE KILLS, ROYAL BLOOD & MANY MORE 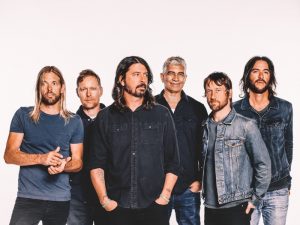 “Grohl and the Foos rework rock history into an album that pays homage to, and uses their love for, the late greats to reinvigorate the band. It’s an album for rock fans and rock stars: The Foo Fighters rank among the best of both.”—AV CLUB “Their most balanced record yet… adds big-studio texture without diluting the band’s raw tumult… The highlight is ‘The Sky Is a Neighborhood,’ a hulking dream-metal anthem: ‘Trouble to the right and left,’ Grohl sings, driving into the darkness with a Bic lighter raised to the heavens.”—ROLLING STONE “Easily the finest album of the Foo Fighters’ 20-plus year recording career, an artistic breakthrough that hopefully marks the start of an exciting new era in the band’s continued musical odyssey.”—POPMATTERS

Foo Fighters’ ninth studio album Concrete and Gold has entered the Billboard 200 at #1, with sales of nearly 130,000 copies in the first week since its September 15 release on Roswell Records/RCA Records.