2018 HEADLINE TOUR KICKS OFF JANUARY 24; SET TO PERFORM AT COACHELLA LATER THIS YEAR 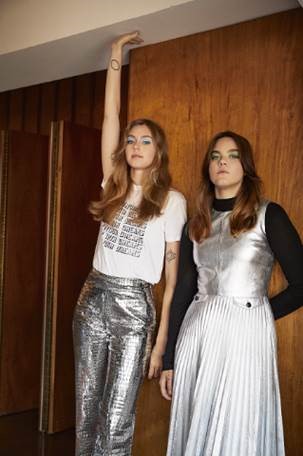 First Aid Kit has shared the official video for “Fireworks” – watch here. Directed by Mats Udd, the visual takes sisters Klara and Johanna Söderberg back to the 80’s where they attend a high school prom that comes to an abrupt and mysterious end. “Fireworks” is the latest track from their forthcoming album, Ruins, and has been praised by The New York Times, Stereogum, SPIN, and more. Paste declares the song is “another gorgeous glimpse of First Aid Kit’s new record.”

First Aid Kit says: “We’re thrilled to release the video for ‘Fireworks.’ We’ve always loved the idea of American high school proms, but never got to experience one in real life. It was incredible to get to recreate one in our hometown of Stockholm with director Mats Udd. Aesthetically it’s such a different look from our previous video – it was fun to go full 80’s mode. We got to dress up our friends and our mom in full on retro looks. We had a blast shooting this video and found out ‘Fireworks’ is a great song to slow dance to.”

The Swedish duo will release Ruins, their fourth studio album, on January 19 via Columbia Records. Produced by Tucker Martine (My Morning Jacket, Laura Veirs), the album was recorded in Portland, OR where the Söderberg sisters collaborated with the accomplished and talented likes of REM’s Peter Buck, Wilco’s Glenn Kotche, and Midlake’s McKenzie Smith. Consequence of Sound named Ruins one of their “most anticipated albums of 2018,” praising the record is “a rawer sound [with] a willingness to expose more of their inner selves than perhaps ever before.” Ruins is available for pre-order now and includes lead single “It’s A Shame” as well as “Postcard” and “Fireworks.” See full track listing below.

In celebration of the album’s release, First Aid Kit will embark on a North American headline tour for the first time since 2015. The run of shows kicks off January 24 in Oakland, CA and concludes February 13 in New York, NY. Tickets and more information are available at http://www.firstaidkitband.com/. First Aid Kit is also set to perform at Coachella on Saturday, April 14 and April 21. For more information, visit www.coachella.com.

Ruins follows the 2014 release of Stay Gold, a lush and ambitious 10-song collection that beautifully captures the duo’s vivid storytelling, landing First Aid Kit countless “Best of 2014” accolades. Earlier this spring, First Aid Kit also released a stand-alone single on International Women’s Day entitled “You Are The Problem Here.”  It is an empowered, passionate, and angry song that confronts the rape culture epidemic, with a portion of proceeds donated to Women for Women International.