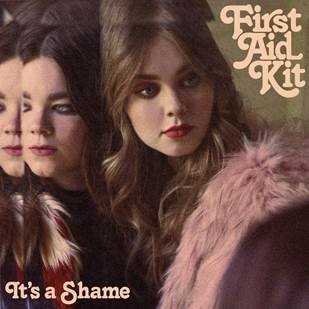 Swedish duo First Aid Kit—sisters Klara and Johanna Söderberg—have returned with their fantastic new single “It’s A Shame,” which premiered today as a First Play on Zane Lowe’s Beats 1 radio. Recorded in early 2017 and produced by Tucker Martine (My Morning Jacket, Laura Veirs) in Portland, OR, “It’s A Shame” is a plea to live in the moment, because everyone disposes of each other eventually.

Klara and Johanna explain: We went to Los Angeles last spring and spent five weeks there writing. It was a tough time for the both of us. We were in this beautiful sunny place, but mostly felt sad and lonely. “It’s a Shame” is a song about the emptiness and desperation you feel after a relationship has come to an end. How you will go to great lengths just to numb the pain and feel less lonely.

To celebrate the release of “It’s A Shame,” First Aid Kit will return to the U.S. next week, with live performances scheduled in San Francisco, Los Angeles and New York, in addition to multiple performances in Austin as part of Austin City Limits Music Festival. See below for all dates.

Hailing from a southern suburb of Stockholm, Klara and Johanna began composing songs as teenagers in 2007. The sisters released two studio albums with Wichita Records—The Big Black And The Blue in 2010 and The Lion’s Roar in 2012, featuring stand-out single “Emmylou,” which prompted Rolling Stone to name the song one of its “10 Best Singles of 2012,” saying “you may not hear a more beautifully sung record this year.”