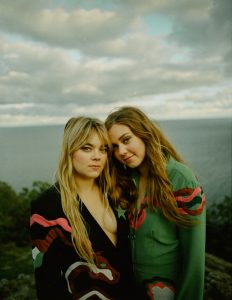 “It’s th[e] tonal juxtaposition that places Palomino among First Aid Kit’s best work. Not only are they diversifying their stylistic pallet, but by doing so, they’ve hit upon a new form of emotional songwriting.” – Consequence

Written and recorded in their home country of Sweden, Palomino finds Klara and Johanna Söderberg turning to music with a sense of optimism as an escape from the dark times of the past few years and coming into their own as individuals, sisters, and a band. The 11-track LP was produced by Daniel Bengtson and features seven brand new songs as well as lead single “Out of My Head,” “A Feeling That Never Came,”“Turning Onto You,” and “Angel.” See full tracklisting below.

In speaking about Palomino, First Aid Kit says: “Here it is. Our fifth album Palomino. Straight from our hearts to yours. We are immensely proud of this record and we had such a joyous experience making it. To us, it symbolizes freedom and moving forward. Like the imagery of the Palomino riding off into the unknown, we hope these songs will give you inspiration and solace wherever they find you.”

Coinciding with today’s album release, First Aid Kit has announced a North American headline tour slated for Summer 2023. The first leg of dates will feature Hurray For The Riff Raff as support and kick off in Oakland, CA on May 15 with stops in Los Angeles, Toronto, Vancouver, Denver, Seattle and more. First Aid Kit will then hit the East Coast in July with The Weather Station. Commencing in Nashville, TN on July 12, the second leg will bring First Aid Kit to Washington DC, Boston, Toronto and more with a show at New York City’s iconic Radio City Music Hall. See full routing below.

With regards to their tour announcement, First Aid Kit adds: “Palomino Tour dates in North America are finally announced and we promise you it will be worth the wait! We are beyond excited to bring our new songs and show to you next spring and summer. Bonus points that two of our favorite bands will be joining us on the road, Hurray For The Riff Raff on the West Coast in May and The Weather Station on the East Coast and Midwest in July. What a dream! It’s going to be FAKing amazing :)”

Tickets to the newly announced dates will be available for purchase via the artist presale beginning Wednesday, 11/9 at 10am local time until 10pm local time Thursday, 11/10. General onsale begins Friday, 11/11 at 10am local time. For tickets and more information, visit https://www.firstaidkitband.com/.

*   with Hurray For The Riff Raff

#  with The Weather Station

Uplifted by the familial creative harmony of sisters Klara and Johanna Söderberg, First Aid Kit delicately thread together eloquent folk, breezy Americana, and pensive pop. After amassing over 1 billion streams and counting, the two-time BRIT Award-nominated Swedish duo’s blend of artful songcraft and ambitious melodies continues to fixate audiences worldwide. Following The Big Black and The Blue [2010] and The Lion’s Roar [2012], the group reached critical mass with 2014’s Stay Gold. The lead single “My Silver Lining” gathered hundreds of millions of streams and picked up a gold certification in the UK. In 2018, Ruins went gold in Sweden and earned “4-out-of-5 stars” from The Guardian, Q, and NME, while Pitchfork applauded it as “a showcase for their sweet harmonies, with some bold stylistic departures.” In the wake of the latter, they scored a second nomination at the BRIT Awards in the category of “Brit Award for International Group.”

Along the way, they collaborated with everyone from Jenny Lewis and Conor Oberst to George Ezra and Zara Larsson. Beyond dozens of film and television syncs a la The Umbrella Academy, the girls voiced characters in the English and Swedish versions of NETFLIX’s Centaurworld. Not to mention, they’ve delivered stunning performances on Jimmy Kimmel LIVE! and The Late Show with Stephen Colbert. First Aid Kit take flight like never before on their 2022 fifth full-length, Palomino. Produced by Daniel Bengtson and crafted in Sweden, it leans into vibrant and vital pop hooks with their signature intuition and emotional acuity on display as introduced through the single “Out of My Head.”