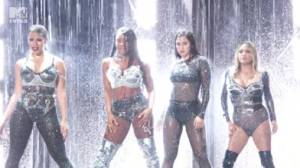 NEW YORK, NY (August 28, 2017) – On the heels of Friday’s release of Fifth Harmony, Ally, Dinah, Lauren and Normani shut down the stage at last night’s MTV VMAs for a performance of the self-titled album’s lead single, “Down” feat. Gucci Mane (Watch here). In addition to their first-ever VMAs performance, the group also took home a Moon Person for “Best Pop Video” for the Gucci Mane-assisted track.  Last night’s appearance concluded a massive weekend celebrating the release of their third album, which clinched the No. 1 spot on iTunes in 48 countries and soared to No. 1 on the iTunes Pop chart in all markets.  Fifth Harmony shows no signs of stopping, however, as they return to Good Morning America tomorrow for a performance of new song, “He Like That,” already a fan-favorite from the album and the #1 video in the iTunes US store.

The 7/27 follow-up has been praised by Harmonizers and critics alike, with USA Today lauding Fifth Harmony as, “their best expression of the girl-gang empowerment they’ve preached throughout their career,” and declaring the album, “their strongest work yet.”  Rolling Stone concluded that “It’s the group’s most cohesive album yet and a satisfying introduction to what Fifth Harmony can be capable of in their new era.”  Working with both longtime partners and new collaborators, including The Stereotypes, Skrillex, Poo Bear, Monsters and Strangerz, Ester Dean, Ammo & Dallas K, Dreamlab, Harmony Samuels, Tommy Brown and Sebastian Kole, Fifth Harmony, which was also co-written by Ally, Dinah, Lauren and Normani, showcases the confident and empowering collective voice of Fifth Harmony that fans know and love.