“WALK ON MINKS” BY FUTURE OUT JUNE 6 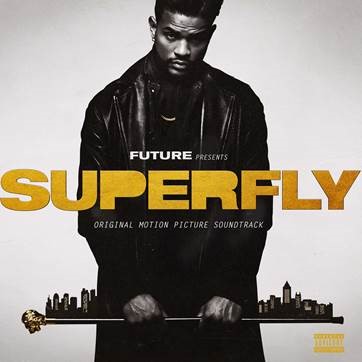 Multi-Platinum Atlanta hip-hop trailblazer and trendsetter Future not only serves as executive producer and curator of the album, but also produced the film alongside Joel Silver [The Matrix, Die Hard, Lethal Weapon].

To build a blockbuster soundtrack befitting of the source material, Future attracted and assembled an airtight collection of A-list superstars for 13 big screen-level anthems. Reflecting both the movie’s tone and the spirit of tomorrow’s rap, it carries on a musical legacy set by the original Superfly in 1972 on Curtis Mayfield’s legendary soundtrack.

Further opening the film’s world, Zane Lowe will exclusively premiere the hypnotic single “This Way” by Khalid X H.E.R. on Apple Music as his latest “World Record” June 5 at 12pm ET. This lush duet unites two of alternative R&B’s hottest voices in one unforgettable moment for the flick and the culture. The next instant grat, Future’s “Walk On Minks,” drops Wednesday June 6. Produced by frequent collaborator Zaytoven, its airy keys underscore the hashtaggable club-ready chant “You can walk on minks” as it immediately captivates. Yung Bans turns up alongside Future for the bold and braggadocious “Bag” while “Money Train” rolls towards trap supremacy fueled by Gunna, Young Thug, and Future. It also boasts the previously released “No Shame,” which culminates on a seismic guitar solo.

Spring Aspers, Head of Sony Motion Pictures Music Group, said, “Future’s work on this album continues the remarkable legacy established by the original. He creates a musical soundscape that not only perfectly complements and underscores the film, but brings to life a time and place in today’s Atlanta and a culture of trap music. In bringing together this incredible group of artists, Future has made an album as thrilling as the film.”

Cruise with Superfly this summer.

ABOUT SUPERFLY
Superfly – the film that helped define a genre in its characters, look, sound, and feel – is reimagined with Director X, director of legendary music videos (Drake, Rihanna), introducing it to a new generation. The screenplay is by Alex Tse.  The film is produced by Joel Silver and Future. In theaters nationwide June 13, 2018.

ABOUT FUTURE:
Where would hip-hop be without Future? With millions of singles and albums sold, countless packed shows, and streams in the billions, his shadow looms heavy over the game. He carried trap music from the bandos to fashion shows as a generation of Southern artists rose in his wake. A decade-long grind gave rise to an unbelievable string of mixtapes, reaching its apex on the trifecta of Monster, Beast Mode, and 56 Nights. 2015’s DS2 became his first of five number one debuts on the Billboard Top 200 followed by What a Time To Be Alive with Drake and Evol. In 2017, he unleashed the platinum-certified Future and gold-selling Hndrxx back-to-back and emerged as “the first artist to release two Billboard Top 200 number ones in consecutive weeks.” Future‘s “Mask Off” went quadruple-platinum, ascended to #5 on the Hot 100, and became his biggest smash yet. He performed on The Ellen DeGeneres Show, lit up Coachella, and headlined the massive “Nobody Safe” Tour. As he covered issues of GQ, Rolling Stone, and XXL, Hndrxx graced year-end lists from Pitchfork, Complex, Entertainment Weekly, Noisey, Variety, and more. He teamed with Young Thug for the collaborative epic Super Slimey, which captured #2 on the Billboard Top 200 upon arrival. Extending his reach yet again, he provides the soundtrack for the high-profile Superfly remake as he readies a barrage of new projects to be unveiled at his signature prolific pace.