KING IS SET TO PERFORM HER NO. 1 HIT “DRUNK (AND I DON’T WANNA GO HOME)” WITH MIRANDA LAMBERT AT THE BILLBOARD MUSIC AWARDS THIS SUNDAY 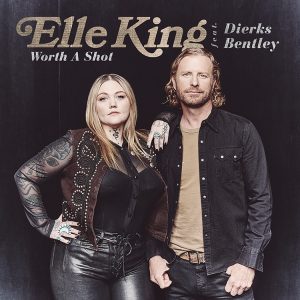 TORONTO, ON. – Six years since Elle King and Dierks Bentley made waves with their Grammy-nominated, CMA Award winning, No. 1 hit “Different for Girls,” the entertainers are teaming up again for their new collaboration, “Worth A Shot.” Listen here.

In the new track, the two sing of a relationship on the rocks and a whiskey-fueled reconciliation, with ice-melting vocals and a glass-raising chorus. The upbeat tune was first introduced at King’s sold-out show at the Ryman Auditorium earlier this year as part of her headline Drunk And I Don’t Wanna Go Home Tour, where Bentley joined her on stage to perform.

“Dierks took a chance and brought me into the country world. I couldn’t make my own country record, which is my favorite album I’ve ever made, without including the person who gave me a seat at the table,” said King. “To be honest, Dierks and I just have fun no matter what we do, especially singing and performing great songs. This song is all about trying to get back to the beginning of something, and so it’s only right that we go back to where it all started for me.”

“Worth A Shot” is the follow up King’s smash single “Drunk (And I Don’t Wanna Go Home)” with Miranda Lambert. The Grammy nominated, certified Platinum hit reached #1 on both Billboard’s Country Airplay and Mediabase/Country Aircheck Charts. The #1 marked the first woman-woman collaboration to reach the top spot on Billboard’s Country Airplay chart since Reba McEntire and Linda Davis’ “Does He Love Me” in 1993, which was also the only one on the 1990 launched airplay chart.

King and Lambert will perform “Drunk” this Sunday at the 2022 Billboard Music Awards, where the song was named a finalist for Top Rock Song. It has also been nominated for a Grammy Award (King’s fourth nomination), a CMA Award, two CMT Music Awards and was the recent recipient of the Video of the Year Award at the 57th ACM Awards (a second joint win for the pair). Additionally, the track hit #1 on both Billboard’s Rock Digital Sales Chart and Country Digital Sales Chart upon release and marked King as the first female artist in history to have scored four radio No. 1 singles on different formats including Adult Pop Songs, Adult Alternative Songs, Alternative Songs and Country Airplay charts.

Earlier this year, King released her “stompin’ and righteous” (MusicRow) new track “Out Yonder,” which CMT deemed “the dash of spice the country music genre has been craving for quite some time.”

Following her headline Drunk And I Don’t Wanna Go Home Tour, King is currently hitting the road with Chris Stapleton as part of his All American Roadshow Tour. For tickets and additional details, visit ElleKing.com.

Multi-platinum, award-winning recording artist Elle King has enjoyed nearly 1.7 billion streams worldwide. King spent the better part of 2021 supporting her #1 hit “Drunk (And I Don’t Wanna Go Home) with Miranda Lambert, which has amassed over 275 million on-demand streams worldwide, and hit #1 on both Billboard’s Rock Digital Sales Chart and Country Digital Sales Chart upon release.  The track not only garnered a nomination for Musical Event of the Year at the 2021 CMA Awards, but earned King her fourth Grammy nomination (Best Country Duo/Group Performance).  Additionally, the track marked King as the first female artist in history to have scored four radio No. 1 singles on different formats including Adult Pop Songs, Adult Alternative Songs, Alternative Songs and Country Airplay charts.

Her debut album Love Stuff featured her breakthrough single “Ex’s & Oh’s,” which earned her two GRAMMY nominations and is certified 4x times platinum.  The breakthrough single hit No. 1 on Billboard’s Hot Rock Songs Chart, topped the AAA, Hot AC, and Alternative Radio charts, leading King to become the second female artist in 18 years to reach No. 1 at the latter format.  Her single “Shame,” featured on her second studio album Shake The Spirit marked King’s fourth radio #1 single. Prior to the release of her current single “Drunk (And I Don’t Wanna Go Home),” King released her latest EP Elle King: In Isolation in summer of 2020, a collection of raw demos/songs she’s recorded acoustically while quarantining at home.

Dierks Bentley continues to be a dominant voice for the genre with over 6.4 billion streams and 21 career chart-topping singles including his recent #1 “Beers On Me” featuring BRELAND and HARDY. Reaching a new creative high while “making music designed to challenge” (New York Times), Bentley co-wrote 10 of 13 tracks on his latest full-length release THE MOUNTAIN, which earned him the highest debut sales of his career and he continues to surprise fans, most recently with his LIVE FROM TELLURIDE collection that was touted as “a gift that Country music fans didn’t know they needed” (The Tennesseean ). Having amassed countless nominations from the ACM’s, CMA’s, Billboard Music Awards and more while also earning 14 GRAMMY nominations, Bentley has also been a member of the Grand Ole Opry for 16 years. He has created professional endeavors outside of music with his Flag & Anthem lifestyle collection Desert Son, and his live-music restaurant and bar franchise “Dierks Bentley’s Whiskey Row” hosts four locations. Bentley will launch his BEERS ON ME TOUR with special guests Ashley McBryde and Travis Denning in June ahead of his SEVEN PEAKS MUSIC FESTIVAL this Labor Day Weekend in Villa Grove, CO. For more information and for a full list of tour dates, visit  Dierks.com.