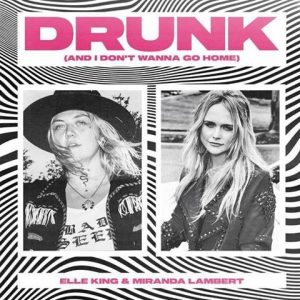 (Toronto,ON –March 9, 2021) Elle King and Miranda Lambert’s brand new collaboration “Drunk (And I Don’t Wanna Go Home)” is clearly the party everyone has been missing. The single debuted at #1 on Billboard’s Country Digital Song Sales Chart and #1 on the Rock Digital Sales Chart.  Listen/Watch the Video HERE.

The song was co-written by Elle King with Martin Johnson, who also produced the track, and was recorded in Nashville and New York pre-pandemic.

This is the second time the two female powerhouse performers have recorded together with their first release “Fooled Around and Fell in Love” (along with Maren Morris, Ashley McBryde, Tenille Townes and Caylee Hammack) going on to win the 2020 ACM Award for “Music Event of The Year.”  Elle also was a special guest on Miranda’s 2019 Roadside Bars & Pink Guitars tour.

To accompany the track, the pair met up in Nashville to film an 80s-inspired wedding video starring Elle as the bride and Miranda as her Maid of Honor complete with a cameo from Elle’s real-life fiancé as the groom. The video was shot in January by directing duo Running Bear using strict COVID protocols.

Check out what the press is saying about “Drunk”:

“…a euphoric collaboration…exhilarating new duet.”
“When the chorus hits, it’s neon-spattered, banjo-flecked euphoria that fits perfectly with the idea of blowing off steam well into the wee hours.”

“Firebrands King and Lambert hit one out of the bar with this singalong ode to handing your keys to the bartender and drinking all night because you don’t want to go home. The song will fuel a thousand karaoke nights and a million bridal parties, but it’s the cotton candy-colored video that really sells it, with King as a feisty bride and Lambert as the maid of honor who’s the first to spike the punch.”

“… an enjoyable glass-raising anthem, but it’s the way that the ‘Ex’s and Oh’s’ singer and country veteran complement one another on the track that denotes a longstanding bond, and an opportunity to listen in on their fun.”

“Drunk” is a memorable, feel-good anthem.”

“…a rip-roarin’ good time!”
“…this catchy tribute to a blackout night, complete with a fun-filled, wedding-themed music video…”

“It’s a wild wedding — and Miranda and Elle are there to party.”
The Boot

“the badassery levels are off the charts. Co-written by King and Martin Johnson, it’s a fun tribute to staying out till dawn and drinking the night away (remember that?).”

“’Drunk’ is coasting at the top of the charts right now because the track crosses any sort of existing genre barriers – the long hailing queen of country revenge tales and the rock/pop King belting out how they’re both not ready to leave the cash bar just yet. It’s a wedding party we all want to be a part of.”

“Fun, upbeat…Exhilarating…a party anthem all about living your best life on the spur of the moment.”