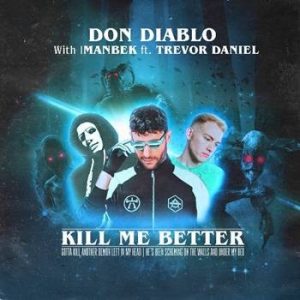 (Toronto, ON; October 30th) World-conquering producers Don Diablo, Imanbek and Trevor Daniel have linked up on new collaborative single ‘Kill Me Better’, out today on Epic Records. Combining retro-futurist, 80s synth-pop vibes with the raw emotion of contemporary emo rap, ‘Kill Me Better’ channels a timeless electronic-pop sound that’s underpinned by Daniels’ soaring vocals. The track touches on the struggles today’s youth around the world have with mental health, with the hopes of portraying that these emotions are common and help is available. Don is promoting https://www.iasp.info as a resource for those who need help globally.

Don Diablo explains: “2020 has been a year where I finally found time to work on my physical and mental health. After many years of nonstop touring, slowly but gradually it felt like I lost touch with my inner self. This pandemic also allowed me to work more on my creativity all across the board, more time in the studio and finally enough time to finish my forthcoming album. ‘Kill Me Better’ reflects the ongoing battle with my inner demons like so many of us are struggling with right now. More and more people around the world are starting to open up about their personal battles, so I really wanted this to be a global collaboration to reach as many people as possible.

He continues: “Imanbek first came on my radar through a longtime friend and my strong relationship with Eastern Europe. His remix for SAINt JHN’s ‘Roses’ not only became one of the biggest records of the year, it also pushed a whole new sound into the dance scene. For our collab I wanted to push the boundaries sonically and take things into a different direction to catch people by surprise. When I first heard Trevor’s voice on the radio it immediately triggered something inside of me. After he scored one of the biggest hits of the year with ‘Falling’, I am even more humbled to be able to collab with such an incredible talent and am excited to finally share our collaborative effort with the rest of the world.”

One of the most recognizable figures from the world of dance music, Don Diablo clocked in at #6 in the most recent edition of the coveted DJ Mag ‘Top 100’ list. Recent highlights from his extensive back catalogue include ‘Survive’, a collaborative single with Emeli Sandé and Gucci Mane, heartfelt single ‘Brave’ with Grammy-nominated singer-songwriter Jessie J, as well as high profile remixes for Ed Sheeran, Rihanna, Coldplay, Mark Ronson and Miley Cyrus.

Exciting young Kazakhstani producer Imanbek has taken the world by storm over the last few months, topping the UK Singles chart with his remix of ‘Roses’ by SAINt JHN and garnering over 1 billion streams across his catalogue.

Houston-born Trevor Daniel burst onto the scene in 2018 with the now-legendary ‘Falling’, a single that topped the US Viral 50 and has since clocked in over 1 billion streams. Pop sensation Blackbear and R&B darling Summer Walker then remixed the track, which went on to become RIAA Certified Triple Platinum. This year saw the 26-year-old drop his debut album Nicotine, as well as a highly regarded collaboration with Selena Gomez, which helped solidify his position as an A-lister of the US music scene.

Featuring three artists who have each become global superstars in their own right, it’s little wonder that ‘Kill Me Better’ sounds so special.