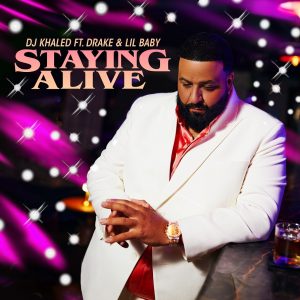 It paves the way one of the biggest hip-hop releases of 2022 and his anxiously awaited thirteenth full-length studio album, GOD DID, on Friday August 26, 2022 via We The Best Music Group/Epic Records. Pre-add/pre-save—HERE.

These three titans have united for the ultimate banger. Khaled assembles anthem to rival even his most earthshaking output as Drake and Lil Baby lock into an unbreakable back-and-forth. Meanwhile, the accompanying visual continues a tradition of larger-than-life and big screen-worthy videos for Khaled. This trio entertains in a hospital setting and captivates on-screen, scene-after-scene.

You’ve got to see it in order to believe it.

Even the announcement of the single peaked anticipation. In addition to big plugs from HYPEBEAST and The Source, Billboard observed, “God Did will continue DJ Khaled’s highly successful year.” Highlighting a private listening session for JAY-Z, TMZ noted, “you don’t have to take Khaled’s word on the quality of the record…based on the pics, it’s written all over Jay’s face.”

Very soon, Khaled will reveal the full blockbuster tracklisting for God Did.  Be on the lookout for more news.

The anthem king has returned with GOD DID, and he delivers his biggest, boldest, and best body of work to date.

He’s kept very busy throughout 2022. He made headlines with an appearance on stage at the Academy® Awards where he opened up the show, and he notably received a star on the Hollywood Walk of Fame. He also ignited the NBA All-Star halftime show with a star-studded performance that had the ground chanting every word. Plus, he served as a presenter, twice, at the Billboard Music Awards.

Last year, Khaled unleashed his twelfth full-length album, KHALED KHALED [We The Best Music Group/Epic Records]. It arrived as his third #1 debut on the Billboard Top 200, sixth #1 on the Top Rap Albums Chart, and fourth #1 on the R&B/Hip-Hop Albums Chart. It also reached platinum status.

Get ready for more from Khaled. Two words say it all, GOD DID.

For over two decades, the very mention of DJ Khaled has implied an elevated level of musical greatness, entrepreneurial excellence, and cultural impact. You’ve heard him across a GRAMMY® Award-winning multiplatinum catalog, seen him in blockbusters such as Bad Boys For Life, caught him on the cover of Rolling Stone, watched him on numerous television programs, and felt his presence from the streets all the way up to the Barack Obama White House. He has achieved dozens of multiplatinum and gold certifications, including the 9x multi-platinum Billboard Hot 100 #1 “I’m The One” [feat. Justin Bieber, Quavo, Chance the Rapper, & Lil Wayne], 6x multi-platinum “Wild Thoughts” [feat. Rihanna & Bryson Tiller], and double-platinum “No Brainer” [feat. Justin Bieber, Chance the Rapper, & Quavo]. The latter propelled his 2019 album, Father of Asahd  [We The Best Music Group/Epic Records], to the top of the charts. Not only did it garner a platinum certification, but it also became his third consecutive Top 2 debut on the Billboard Top 200 and emerged as the “#1 Most-Streamed Record” upon release. To date, he has moved over 20 million singles and 6 million albums in addition to gathering 4 billion-plus streams.

Not to mention, he launched We The Best Music Group—a record label, management, publishing, and production company and in-demand studio. As a committed philanthropist, he founded his 501(c)3 organization The We The Best Foundation. It uplifts individuals throughout underserved communities across the United States and supports various non-profits. He has supported the fight against COVID-19., U2 frontman Bono recruited him as the first social media ambassador for Project Red, and he serves as the national spokesperson for Get Schooled. Now, the power of this legacy defines his thirteenth full-length album—which bears the name—God Did [We The Best Music Group/Epic Records], preceded by the forthcoming banger alongside frequent collaborators Drake and Lil Baby, “Staying Alive.”