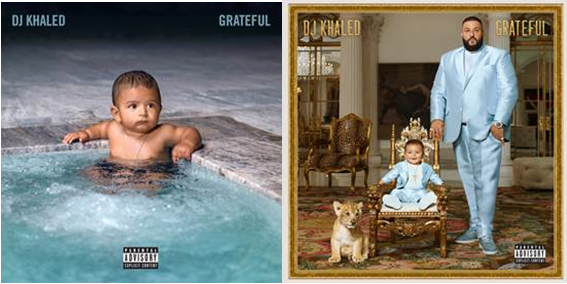 Poised to bring down the house yet again, Khaled takes the stage at the 2017 BET Awards this Sunday June 25, which promises to be one of the night’s most talked-about performances. Be sure to tune in for all kinds of surprises like only he can muster. His television conquest doesn’t relent. On Friday June 30, he will appear on top-rated ABC cooking program, The Chew, which will be a must see!

To celebrate the release of Grateful, Khaled hosts a meet-n-greet at Urban Outfitters in Hollywood, CA today 4pm-6pm at Space Twenty15. If you’re in L.A., don’t miss it!

Check it out HERE.

Khaled introduced Grateful with one of music’s hottest hit streaks in recent memory. “I’m The One” [feat. Justin Bieber, Quavo, Chance The Rapper, & Lil Wayne] became his first #1 on the Nielsen SoundScan Canada Digital Songs chart and achieved MusicCanada platinum status in less than six weeks and also landed his first #1’s in the U.S., United Kingdom, Australia, and New Zealand! The latest single “Wild Thoughts” [feat. Rihanna & Bryson Tiller] stands out as the #2 Most Added at CHR/Top 40 in Canada this week and it’s on track to replicate the success of its predecessors and then some. Check out the full Grateful all-star tracklisting below.

At a closer look, you might find a subtle theme at the heart of Grateful. It releases June 23, its executive producer and Khaled’s infant son Asahd Tuck Khaled was born October 23, and he just dropped a collaboration with the most famous 23 of all—Jordan. It’s a number with history behind it. That history expands today with the arrival of Grateful.

It’s Grateful season, and 2017 belongs to Khaled and his son, Asahd, who at 6-months old is the youngest album executive producer in history.