COUNTRY EP DUE THIS FALL 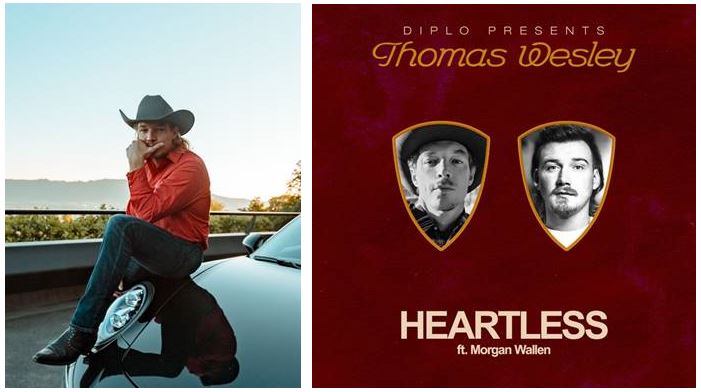 Diplo unveils a second track, “Heartless” featuring Platinum artist, songwriter Morgan Wallen, under his country moniker Thomas Wesley today—listen here, out now on Columbia Records. “Heartless” follows “So Long” featuring Cam and is the second of several forthcoming collaborations due to appear on Diplo’s country EP due out this fall.

Diplo’s recent splash into country music has been lauded by Rolling Stone as “impressively graceful,” while the Washington Post praises “So Long” as “the century’s first great EDM-country song.”

Since the first single, Diplo has performed at Stagecoach’s first ever Stagecoach Late Night where he welcomed Lil Nas X and Billy Ray Cyrus for the live debut of “Old Town Road.” Following the performance, Diplo shared his remix of the viral hit—listen here. Diplo also landed at Baltimore’s Pimlico Race Course for a performance ahead of the 144th Preakness Stakes.

Diplo, born Thomas Wesley Pentz, is one of the most dynamic forces in music today under his own name, as well as a member of the now legendary Major Lazer, LSD with Sia and Labrinth—which has tallied more than a billion streams and just released its debut album, and Silk City with Mark Ronson—whose “Electricity” with Dua Lipa topped charts worldwide and won a Grammy Award for Best Dance Recording. As the world’s most in-demand producer, Diplo has worked with artists as disparate as Beyoncé, Bad Bunny and Turnstile. The past year has seen the release of three EPs, the continent-inspired EP “Europa and California,” inspired by his sometimes-home base of Los Angeles, and the deep house-inspired “Higher Ground” that was followed by a brand-new show production at Diplo’s Coachella headline set. He continues to tour the world over.

Since the release of “If I Know Me” on Big Loud Records, Morgan Wallen has wasted no time leaving his mark on Country music. The album delivered multiple Platinum-certified #1’s and Gold-certified singles, plus a nomination for the CMT Breakthrough Video of the Year. With over one billion streams to his credit, Wallen has also co-penned hits for Jason Aldean, Kane Brown, Jason Isbell and more. He is currently on tour with Florida Georgia Line and will join Luke Combs on tour this fall.