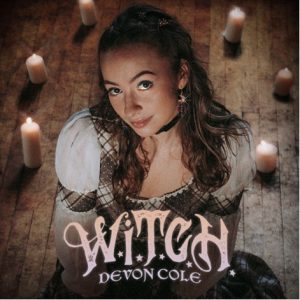 For Immediate Release (July 7, 2022) – After lighting up the world with over 40 million cumulative TikTok views on teaser posts and nearly 300,000 pre-saves, Calgary-born and now Toronto-based alt-pop singer-songwriter Devon Cole officially releases her new single “W.I.T.C.H.” — an acronym for “Woman in Total Control of Herself”—today via Arista Records.

Locking into a head-nodding groove, the track’s dancefloor-ready bass line thumps in tandem with the beat. Devon infuses every verse with empowered confidence and clever witchy puns while she assures, “Such a wonder to be under her spell, what a woman in total control of herself.”

Regarding the single, Devon commented, “To me, ‘W.I.T.C.H.’ is a song that reclaims the witch as a symbol of women’s resistance. It celebrates women’s strength, autonomy, and rebellion – traits that contradict the patriarchal idea of what a woman should be and how she should behave. Some say that witches were the original resistance fighters, healers, abortionists, and there was and is a great deal of paranoia around that. This song is basically poking fun at the idea that a woman in control of herself – her body, her sexuality, her beliefs – is such a scary thing.”

“W.I.T.C.H.” is the first taste of new music to be released with her new label home Arista Records and makes history as Sony’s biggest pre-save campaign for any female artist to date. Stay tuned for the premiere of the official music video soon.

Devon has reached the precipice of a major breakthrough. She has amassed millions of streams on her 2021 independent project, Party For One, as well as singles such as “Uncall It.” Not to mention, she has earned acclaim from Bustle for rectifying and reclaiming “Blurred Lines” and CBC who perhaps put it best, “Devon Cole is making earworm pop with a feminist edge.”

It just paves the way for more to come from Devon.