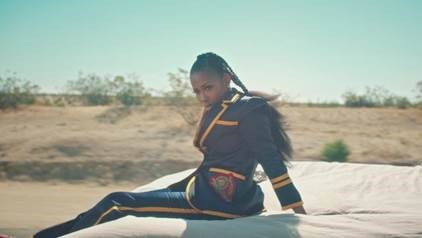 …Her organic approach is bringing sexy back.” –XXL

“…you can’t help but to trust her completely.” – Pitchfork

Columbia Records recording artist, DeJ Loaf, has released the official video for “No Fear.” Written and directed by rubberband, the video features DeJ, dressed to the nines in a satin Gucci pantsuit, daydreaming in her bedroom, only to unlock inner magic and be whisked away to a colourful dreamscape. Complete with animation and dream sequences, the video for “No Fear” is as whimsical as the track itself.

Says DeJ of the video, “Growing up, I used to daydream in my bedroom about everything from love to my career to traveling the world. The video sort of reflects that joyful feeling of going from daydreaming to realizing my dreams. My new album is a personal journey and I hope my fans enjoying riding along with me.”

DeJ released “No Fear”, her first official single since her EP #AndSeeThatsTheThing, to immediate response. FADER notes “…the track is made as much for private listening as it is for the dance floor…” while Karen Civil proclaims the song “… a soon-to-be summer smash.” The breathy, up-tempo track finds DeJ rapping about loving in full, living without a filter and happily throwing caution to the wind. Produced by multi-platinum selling producer Christoph Andersson, the insanely catchy song is anchored in a bouncy beat practically tailor made for summer dance parties.

“No Fear” serves as the official single for her forthcoming, major label debut album Liberated. Executive produced by multi-platinum selling, Grammy nominated producer Ricky Reed, Liberated will be released later in 2017. DeJ teased the release of “No Fear” every day for seven days on her social channels, sharing animated GIFs, quotes from her inspirations (including Grace Jones and David Bowie), photos and even audio snippets leading into the final reveal.

The 26 year old Detroit native has had nothing short of a thrilling ascent. A former janitor in her hometown of Detroit, she burst onto the scene with “Try Me” in 2014, now certified Gold. Other career successes quickly followed including her single “Back Up” being certified Platinum in the U.S., garnering over 500 million streams combined, a MAC Cosmetics campaign, opening for Nicki Minaj on Minaj’s stadium Pink Print Tour, appearing as the breakout cover star on the 2015 XXL Freshman issue and nominations for multiple BET Awards including Best Female Hip Hop Artist, Best New Artist and the Coca-Cola Viewers Choice Award.