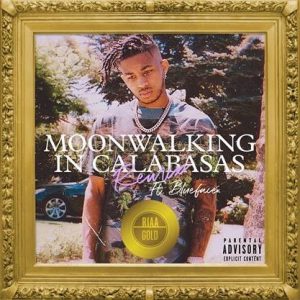 (January 21, 2021 – Los Angeles, CA) – Continuing a rapid ascent to superstardom in 2021, Pontiac, MI rising rapper, YouTube star, and social media phenomenon DDG picks up a gold certification in Canada and the U.S. for his smash single “Moonwalking In Calabasas (Remix)” [feat. BLUEFACE]. This marks his second gold plaque from the RIAA following “ARGUMENTS” in 2020. Get it HERE via Epic Records.

“Moonwalking In Calabasas (Remix)” has consistently posted up impressive numbers. After crashing the Billboard Hot 100 at #98, then returned to the chart at #82 last week. As a testament to the song’s staying power, it also reclaimed #1 for the third time on Spotify’s Rap Caviar—an impressive feat for a nearly nine-month-old track. Thus far, it has gathered 115 million global audio streams and 40 million-plus views across all 3 music videos. Not to mention, it rose to #36 on the Spotify US Chart. Beyond claiming top spots on playlists such as Rap Life and Rap Rotation, its run included three stints at #1 on Rap Caviar, holding a place in the Top 5 100-plus days later. Last month, DDG reupped the song with a Remix featuring YG. Its video notably amassed 1 million views in less than 24 hours.

Recently, he revealed the music video for “Let You In” from his full-length debut album, Valedictorian [Epic Records]. In addition to crossing the 1 million mark, it garnered plugs from Billboard and HipHopDX, to name a few.

Get ready for more surprises from DDG this year, including an upcoming project with producer OG Parker [Migos, Chris Brown, YFN Lucci] and more.

Flexing with clever quotable bars, blockbuster hooks, and superstar power, DDG shakes up the status quo with unpredictable and undeniable bangers. After 2018’s Take Me Serious, he rose to the top of the hip-hop class on VALEDICTORIAN. Within just a year, the single “ARGUMENTS” scored his first gold certification. Igniting 2020, he achieved a major breakthrough with “Moonwalking In Calabasas (Remix)” [feat. BLUEFACE], earning a ubiquitous hit and his second gold plaque in the process. Generating over half-a-billion total streams and views and building a rabid fan base, DDG’s influence proves downright inescapable.