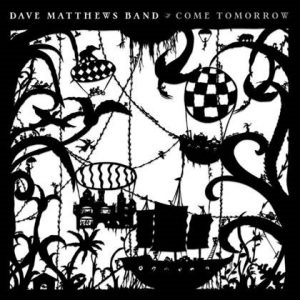 On June 8, RCA Records will release Dave Matthews Band’s long-awaited new album Come Tomorrow. Come Tomorrow is the band’s ninth studio release and its first since 2012’s Away From The World, which debuted at No. 1 on Billboard 200.

The cover art for Come Tomorrow is by Béatrice Coron, who creates narrative allegories in silhouette to render archetypal stories.

Dave Matthews Band will be previewing songs from Come Tomorrow during its North American tour, which kicks off on May 18 at Cynthia Woods Mitchell Pavilion in The Woodlands, TX, with stops in Toronto and Ottawa in July 2018. Every online ticket order for the 2018 summer tour, purchased by May 17, 2018, will include a choice of CD or digital download of the new album when it is released. Tickets are on sale now.

The headline run includes two-night stands in Denver, CO and West Palm Beach, FL, and a three-night stand over Labor Day weekend at The Gorge in Quincy, WA – a tradition beloved by both the band and its fans. The tour will wrap up with a sold-out show at the Hollywood Bowl in Los Angeles, CA on September 10. See below for itinerary or visit http://davematthewsband.com.

GRAMMY® Award-winning Dave Matthews Band has sold more than 20 million tickets since its inception and a collective 38 million CDs and DVDs combined. It is the first group in history to have six consecutive studio albums debut at No. 1 on the Billboard 200.