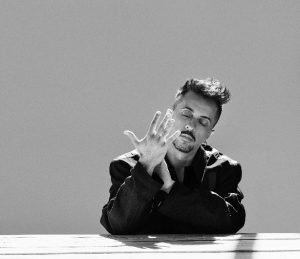 STURM I – FEAR was featured by the computer giant Apple Inc. in this year’s Apple new product launch keynote address.

“Hi, Speed”, one of the most eagerly anticipated events of 2020, was live streamed from the Steve Jobs Theater in Cupertino, California.

Apple CEO Tim Cook’s words of introduction gave way to the sound of Dardust’s music, which accompanied the presentation visuals for the iPhone 12 Pro.

Dardust now joins a glamorous, select band of artists that Apple has highlighted over the last twenty years, including Feist, Ludovico Einaudi, and Billie Eilish.

Starting out from the historic Renaissance city of Ascoli Piceno, Dardust’s journey has taken him all the way to Cupertino, the capital of the modern Renaissance.
“The thing that gives me most pleasure”, says Dardust, “is that they chose the most daring piece on the album. The one that marks the biggest break with the neoclassical genre, and because of the new balances that you have to strike, the most complicated piece on the disc to realize. So I’m doubly happy, because my vision, which is to exaggerate everything one way or another, was picked up and shared by a giant like Apple.”

“Sturm I – Fear” can be heard on “S.A.D. STORM AND DRUGS” the album by Dardust released in January 2020 by SONY MUSIC MASTERWORKS & ARTIST FIRST (https://dardust.lnk.to/S_A_D)

“Sturm I – Fear” tells the story of a storm within, and the fear of facing it. Electronically, Dardust has gone a step further in his use of synth and reverb effects that burst out to take centre stage along with piano arpeggios on alternate hands.

Discover “Sturm I – Fear” on the playlist Dardust Essential by Apple Music: https://apple.co/3j168Vp

Dardust has one of the biggest followings in the world among Italian pianists, with over 35M plays to his credit. Known both in Italy and abroad for his unique, unmistakable sound and for writing the music to accompany international events like the Super Bowl and the NBA All Star Game, he has now provided the soundtrack for another important international launch campaign.