JOIN FORCES TO DROP THE NEW TRACK “WITHIN ME” 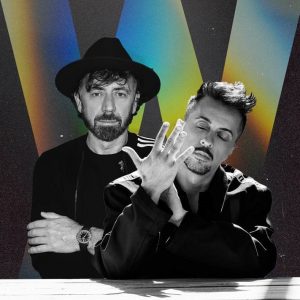 Toronto, Canada, February 12, 2021 – “Within Me” unites two very different Italian artists whose combined talents have created something even greater than the sum of their parts. Dardust collides the worlds of minimalist piano composition and ambient electronica, a mix that simultaneously echoes Max Richter, Philip Glass and Aphex Twin. Meanwhile, no introduction is needed for Grammy award-winner Benny Benassi, the electro house pioneer who regularly packs festivals and amasses millions of streams all over the world.

The result is something refreshingly different yet entirely in tune with their backgrounds. “Within Me” opens with Dardust’s captivating piano, which captures a melody as immediately infectious as anything from the world of pop while expressing an atmosphere both beautiful and evocative. Set alone, it’s serene, but Benny Benassi’s dynamic drops and restless beats fire it into the dancefloor. What follows is two artists challenging each other to reach new heights, both weaving between and complementing each other’s creativity.

“Within Me” is released alongside a video.

Dardust commented, ““Within me” is the opposite side of “Without You”, the most intimate and romantic track of the latest album “Storm and Drugs”. When I met Benny, we decided to contaminate it with his own world, looking out for something that would create an even stronger contrast with the original version. The song that came out of that could be considered as “Melodic Techno”, a romantic and magical club track that exasperates the simplicity and outrightness of the original version.”

Benny Benassi added, “I’ve always appreciated Dardust’s magical touch as a pianist and as a producer, so when the idea of making a progressive track together with a melodic piano part came about I was really excited to do it. It was amazing we were able to film it in the empty Verona Arena during the lockdown, too. That was a crazy experience!”

Dardust always wanted to push boundaries in music. Classically trained from a young age, his passion for music was equally inspired by everything from Kraftwerk to Underworld. He became a sought-after producer, scoring countless Platinum records and 500 million streams for his work with internationally successful Italian artists such as Mahmood, Sfera Ebbasta, Jovanotti and Ghali.

Throughout this era, one idea remained constant: could he reinvent classical music with an intergalactic vibe in a similar way to how David Bowie reimagined pop? It’s something he’s strived to achieve, from his debut album 7 in 2015 to last year’s ambitious S.A.D. Storm And Drugs (Artist First/Sony Music Masterworks), which set 18th-century classical piano within the 90s Manchester club scene.

In a career spanning thirty years, the iconic Benny Benassi has risen from an underground club DJ to a multi-million-selling producer. He shot to international success in 2003 with “Satisfaction”, a global hit that peaked at #2 in the UK with the help of an unforgettable video. That star status was confirmed with the release of his debut album, “Hypnotica”.

Since then, Benassi has accomplished countless major achievements. His tracks, such as the Chris Brown collab “Beautiful People” and “Cinema” (with Gary Go) reached huge audiences as he became a major attraction at Coachella, EDC, Ultra, Tomorrowland and countless others. He earned a Grammy for his remix of Public Enemy’s “Bring The Noise” and another when Skrillex remixed “Cinema”. He remains an in-demand collaborator and remixer for a new wave of major artists, including Lil Yachty, Yxng Bane and Jeremih.