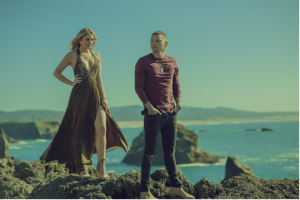 Kane Brown’s co-star in the new clip is Lauren Alaina, his good friend and middle-school classmate turned duet partner. Announced earlier this week, both artists are nominated for the 2017 CMT Music Awards “Breakthrough Video of the Year” – Brown for the clip of his Gold-certified “Used to Love You Sober,” and Alaina for “The Road Less Traveled.”

Directed by P. R. Brown and produced by Steve Lamar, “What Ifs” is the first music video to be filmed at The Inn at Newport Ranch on the breathtaking North California coastline. Prior to the world premiere of the clip on Amazon Music, the “What Ifs” lyric video and an interview with Brown and Alaina about the music video shoot were previewed last week on People.com.

“What Ifs” featuring Lauren Alaina is Kane Brown’s current single at country radio. It was produced by 9-time ACM Award-winning producer/musician Dann Huff and co-written by Brown, Matthew McGinn, and Jordan Schmidt. “What Ifs” is one of 11 songs, 7 of which he co-wrote, on the Kane Brown debut RCA Nashville/Zone 4 album which fans can purchase here.