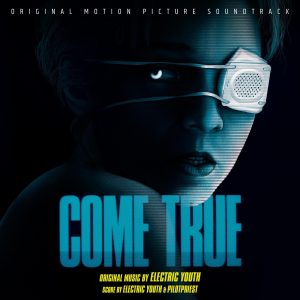 Toronto, ON – March 24, 2021 – COME TRUE (ORIGINAL MOTION PICTURE SOUNDTRACK), an album of music from IFC Midnight’s latest sci-fi thriller by ELECTRIC YOUTH and PILOTPRIEST is now available on Milan Records. The album includes a mix of original music by Toronto based Electric Youth as well as additional score music composed in partnership with Come True director Anthony Scott Burns under his music-making alias Pilotpriest. Come True premiered in theatres and on demand on Friday, March 12 from IFC Midnight.

Making its debut is one of Electric Youth’s original tracks, “Modern Fears,” which showcases the composing duo’s signature blend of melodic strings and synthesized vocals to create one of the film’s most resonating musical moments – listen here. For the larger musical universe of Come True, Electric Youth and Pilotpriest have crafted a score of moving live strings, ethereal synthesizers and emotive vocals, with the 15-track collection also including Electric Youth’s original title song “Come True” as well as new versions of previously recorded songs re-worked for several of the film’s pivotal scenes. In addition to the soundtrack’s digital release, the album will be made available in vinyl format exclusively via Waxwork Records this spring.

Of the soundtrack, ELECTRIC YOUTH says, “Working with Anthony Scott Burns again meant working with a director so much on the same page as us, someone who likes to work from feeling the same way we do. To evoke the deeply visceral and immersive quality of the film, we started on the music before the script was even finished, so that the film would be completed with much of the music already a part of its DNA. That allowed the emotional and internal core of our main character Sarah to be expressed in a way it wouldn’t have otherwise. We created much of the score in direct musical collaboration with the director (under his music making alias Pilotpriest), a unique opportunity that made for a deeply personal result, for what is a deeply personal film for Anthony. The musical result was something that feels internal and ancient, something otherworldly but from within.”

Looking for an escape from her recurring nightmares, 18-year-old Sarah (Julia Sarah Stone) submits to a university sleep study, but soon realizes she’s become the conduit to a frightening new discovery. Dreams twist and nightmares come true in this mind-altering new work of science-fiction from Anthony Scott Burns (OUR HOUSE) that haunts the space between wakefulness and sleep. COME TRUE is an unforgettable cinematic dream well worth the submersion.

There is an emotive quality that music by Electric Youth brings to a film. Their scores, with their signature blend of melodic string sections and synthesized soundscapes, are birthed out of a lifelong passion for cinema, a love they’ve shared together since first meeting at the age of 10. And since first breaking through with the soundtrack to Nicolas Winding Refn’s 2011 Academy Award nominated film Drive, where their now iconic theme song “A Real Hero” scored pivotal scenes and found chart topping and critical acclaim, Electric Youth haven’t slowed down. The Toronto/LA duo’s widescreen synth pop continues to influence and define the stylish, synthesizer based sound that has flourished for a decade now. This is evident on their studio albums, from their debut Innerworld, which cemented the band’s reputation as a leading voice in the intricate mix of pop and electronic elements (hailed by Rolling Stone as “euphoric, wistful pop”), to their most recent Memory Emotion, nominated for Electronic Album of the Year at the 2020 JUNOS. But that only describes one side of their musical landscape, as like the fellow recording artist turned composer duo of Trent Reznor & Atticus Ross before them, Electric Youth’s Austin Garrick & Bronwyn Griffin craft scores that go beyond the sounds found on their acclaimed studio albums, to seamlessly combine the orchestral and the electronic, the traditional and the modern, with a timeless melodic throughline distinctly their own. This has resulted in a diverse range of scores, songs and collaborations to date, from work on further projects with Nicolas Winding Refn (including 2016’s horror-thriller Neon Demon), to Oscar Winning composer Ryuichi Sakamoto’s Async Remodels, from action-thriller Taken 2 to Netflix teen romantic comedy The Perfect Date and teen drama Riverdale.

Pilotpriest is the music-making moniker of writer, director, cinematographer, editor, VFX and composer Anthony Scott Burns. Under this pseudonym, he has released a number of critically successful albums and EPs, including the cult vinyl hit Original Motion Picture Soundtrack, which was released on the celebrated soundtrack label Waxwork Records. He has just completed another upcoming soundtrack for the feature film The Education of Fred Fitzell starring Dylan O’Brien (The Maze Runner) and Maika Monroe (It Follows).

A filmmaker from the new school, Burns is an autodidactic artist that derives inspiration from the simplest motivation: to create art on his own terms. He shoots, edits, scores, writes, designs, and completes the brunt of the post-work on his projects. Born in Kitchener, Ontario, and based in Toronto, Burns has been drawn to filmmaking since a young age. He started his professional career in graphic design and was a Senior Designer at MTV Canada and worked in the commercial sector before focusing on his original films.

He first made his name known with the self-release of the viral fan short film Tron: Destiny in 2011 and followed it up with the short Manifold, which went on to world premiere at the 2013 Fantastic Fest in Austin, Texas. The “tech-noir narrative” starred iconic character actor Stephen McHattie and was widely celebrated on the circuit and on release. The attention garnered from his shorts brought Burns into the mix for a number of A-list projects and led to him being called “the next big thing” by The Hollywood Reporter. In 2014 he directed an episode of Vincenzo Natali’s show Darknet and in 2016 contributed to Kevin Smith’s horror anthology Holidays with the acclaimed segment “Father’s Day.” Burns’ feature debut Our House world premiered at the 2018 Fantasia International Film Festival in Montreal was released later that year by IFC Midnight.