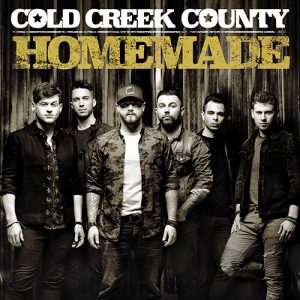 “Homemade,” the title track and first single from the bands upcoming 7 song sophomore EP release dropping June 2nd, 2017, is a tribute to the band’s home town roots and family vibes and is available for pre-order now with a free instant grat download of the first track “Homemade”

There is something new and different about country rock band Cold Creek County. The Ontario band’s signature multi-part vocal harmonies are bigger and more prolific. The feel-good party songs from the band’s award winning Til The Wheels Come Off (2015) debut have given way to a warm and more reflective look at the people and places around them.

Like most of Cold Creek County members, Ches Anthony grew up in a musical family in his home town of Dalmeny, Saskatchewan (population 1,702) in a family that cared about the music. “Homemade” is produced and mixed by Scott Cooke (Florida Georgia Line, Nickelback) and Doug Oliver.

Cold Creek County have already been rewarded for their debut music release “Till The Wheels Come Off” winning three 2016 CMA Ontario Awards (Group or Duo of the Year, Rising Star Award, Fans Choice) and the 2016 CRMA Best New Group or Solo Artist: Country. The band were also nominated for a 2017 Juno Award (Breakthrough Group Of The Year) and three 2016 CCMA Awards (Group or Duo of the Year, Rising Star, Video of the Year (Our Town) performing their massive radio hit “Our Town” on the live CCMA TV broadcast. Cold Creek County are managed by Kevin ‘Chief’ Zaruk at Chief Music (Florida-Georgia Line, Dallas Smith, Chris Lane, and Joey Moi) and co-managed with band leader Doug Oliver.

“Homemade” was recorded in Ontario with the support of the Ontario Media Development Corporation.