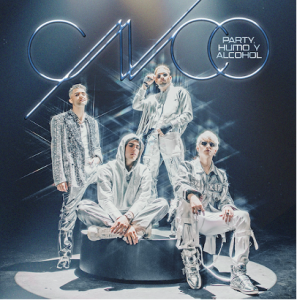 “The Latino One Direction has not just diversified the playing field
— they’re on the verge of a global pop takeover.” – Rolling Stone

“It’s worth getting to know CNCO, the Latin American boy band poised to break big with
their punchy mix of Spanish lyricism, dance skills and on-trend beats.” –Time

TORONTO, ON – January 13, 2022 – Multiplatinum Latin GRAMMY®-nominated quartet, CNCO, return with their much anticipated single, Party, Humo y Alcohol. The track, which displays the progression of the group’s music with a new sound, is released alongside the music video that features high fashion, stunning visuals. The single was written by CNCO with Hv and Kairo La Sinfonia, who also produced. Click here to watch.

Making a stylistic leap, CNCO surprises us with its expert mastery of an upscale, 1980s vibe on Party, Humo y Alcohol. Taking a more grown-up approach, the music video focuses on the members’ individual personalities as performers, while incorporating glamour and recognizable 1980s visual elements like lens flare.

This ode to liberation describes a woman who breaks free of a bad relationship and outdated expectations: “Se puso pa’ ella y soltó el amor, ahora quiere bailar, party, humo y alcohol.” (She focused on herself and let go of love. Now she wants to dance, party, smoke and alcohol.)

Last year, CNCO launched their new era as a four-piece with Toa La Noche, debuting with a performance on Univision’s Premios Juventud. Following the release, the group embarked on a 16 date U.S. club tour going coast to coast, giving fans a chance to see them like never before.

CNCO also were featured on singles for other artists, while in the studio honing in on their new sound. The quartet joined forces with El Nuevo Rockstar Alex Rose on his single, Pa Que Guaye, released via WK Records, as well as with award winning composer and producer Reggi “El Auténtico” for Cinturita Remix.

CNCO are honourees on the esteemed annual Forbes 30 Under 30 Music List, Class of 2021. The list, which looks at people topping charts and shifting culture in music, was just this year by class of 2014 alum Taylor Swift, among others. CNCO marked the only Latin act honoured this year. See here.

After elevating Latin music, they elevate themselves both personally and creatively in 2022 on new single, Party, Humo y Alcohol, and more to come. This time around, they dive into urban, reggaeton, and pop styles spiked with confidence, charisma, and a newfound scorching touch of sensuality.