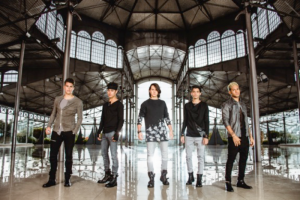 With Over 66 Million Streams and Counting, “Mamita” Is Just a Taste Of What The Pop Sensations Are Preparing For Their Upcoming Album

The award winning, multiplatinum, pop phenomenon turn up the heat once again in a fun video that celebrates their Latin heritage. CNCO ventured to Quito, Ecuador with director Daniel Durán, who has previously worked with stars such as Pitbull and Gente de Zona. “Mamita” kicks off with a scene true to life, where CNCO get off a plane to be welcomed by a crowd of screaming fans before boarding a van filled with girls. The boys explore and experience the wonders of the Ecuadorian capital culminating with an outdoors performance that confirms the artists’ undeniable star power.

The song has already amassed over 66 million streams (audio & video) and continues the group’s hot streak, which has cemented them as one of the most popular names in Latin music today.

This is just the beginning for the hottest band in the scene. Get ready for CNCO to make history again this year and beyond.

In just two short years, with the support of their manager, Ricky Martin, CNCO has become one of the most sought after musical acts in the world. Tallying over 3.3 billion video views, 1 billion-plus streams, and multiple platinum certifications, their 2016 full-length debut “Primera Cita” cemented them as superstars. In the wake of its release, the group received a Latin GRAMMY® Award nod in the category of “Best New Artist” at the 2017 ceremony in addition to winning 3 Latin Billboard Awards, 3 Latin American Music Awards, 5 Premios Juventud, and 3 Premio Lo Nuestro Awards. Their most successful single to date, “Reggaeton Lento,” crossed the 1-billion mark and became the “#5 Most-Viewed Video on VEVO.” Selling out 40 concerts in 15 countries in 2017 alone, the group proved its status as a touring and ticket-selling machine. Given their success, the young stars were the opening act for Latin icons Enrique Iglesias and Pitbull across the United States and Canada. Recently the band received 4 nominations to the iHeartRadio Music Awards including “Latin Song Of The Year” and “Latin Artist of The Year”; the ceremony is set to take place on March 11 in Los Angeles.