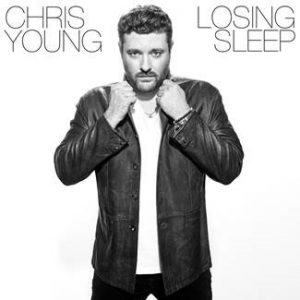 Nashville, Tenn. – September 7, 2017 – Chris Young, who was just invited to become the newest member of the Grand Ole Opry, today revealed the song stack for his upcoming album, Losing Sleep, due October 20 on RCA Records Nashville. Working toward his third album release in under two years, Chris co-wrote every single song for the first time in a remarkable show of creative force, in addition to taking his third turn behind the board as co-producer.

“Every album you make as an artist, you want to continue to grow,” Chris explains. “And you also want people to be in love with it. That’s such a difficult thing to balance, but I think there’s a little bit of something for everybody on this record.”

Fresh off the most successful record of his prolific career, Losing Sleep finds Chris more inspired than ever before. There are new collaborators involved on the record with high-profile names like Liz Rose and Jon Randall, while he continues to work with a core group of tunesmiths including Josh Hoge and Chris’s co-producer, Corey Crowder.

Recently invited to become the newest member of the Grand Ole Opry, Chris Young has earned multiple ACM, BBMA, CMA, CMT, Grammy and RDMA nominations and scored three consecutive chart-topping singles – including his ninth US No. 1 “Sober Saturday Night” with Vince Gill – from his “excellent” (New York Times) album I’m Comin’ Over (2015). He continues to set the bar even higher with the release of his brand new single, “Losing Sleep,” which amassed more than 1.25 Million on-demand streams in its first week of release.

With six albums to his credit, including 2016’s It Must Be Christmas and 2015’s Gold-certified studio album, I’m Comin’ Over, which debuted at No. 1 on Billboard’s Top Country Albums Chart, Chris continues to reach new heights with his hotly anticipated seventh album — Losing Sleep — due October 20, 2017. Named “one of his era’s finest traditionalists” by the Associated Press, the upcoming record will be the RCA Records artist’s third project in less than two years.

An international ambassador for country music, Chris performs to packed houses around the world including his recent appearance at the sold-out C2C Festival in the UK. With a hit-packed set that highlights his nine chart-toppers — including “Gettin’ You Home,” “Voices,” “Tomorrow,” “I’m Comin’ Over” and “Think Of You,” — and sixteen Gold/Platinum certified projects, Chris has joined reigning ACM Entertainer of the Year Jason Aldean as special guest on his They Don’t Know Tour through October before resuming his own headlining dates later this year.

For a full list of tour dates and more information, visit chrisyoungcountry.com.