Chris Young Enlists One Of His “Famous Friends” For Newest Single

Chris Young Enlists One Of His “Famous Friends” For Newest Single 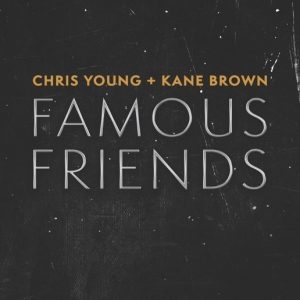 Toronto, ON., – Nov. 16, 2020 — Multi-Platinum performer Chris Young is returning to his roots in Rutherford County, Tenn., for his latest track, “Famous Friends.” Available to stream/download starting this Friday, Nov. 20, Chris’s new single, featuring Kane Brown, impacts country radio at the start of the new year. Chris and Kane talk about the news for the first time on “The Quad with Chris Young” podcast today. Pre-order/pre-save “Famous Friends” here.

While Chris might be famous for his eleven No. 1 singles, nearly 4 Billion music streams and sold-out headlining shows, the Grammy and ACM-nominated vocalist and recent CMT Award winner celebrates his own real-life friends back home in Murfreesboro and Nashville, Tenn. in his newest song:

Written by Chris with Cary Barlowe and Corey Crowder from a headline tour stop in Tampa in 2018, Chris and Kane first teased the track on social media. The autobiographical song mentions Rutherford County, where Chris grew up in Tennessee, and Kane’s hometown of Hamilton County along with Nashville’s Davidson County – a.k.a. Music City.

“This song is a piece of me and it means a lot because it’s honest and it’s real-life,” shared Chris. “Plus, Kane and I are good friends and being able to have that history together, it adds a whole other level to the track. ’Famous Friends’ is one of my favorite songs – it’s personal and it’s a lot of fun, so I’m glad it’s getting out there for people to hear it.”

An anthemic tribute to the names, faces, and legendary stories that make up each hometown, “Famous Friends” is Chris and Kane’s first collaboration since working together on Kane’s 2017 song “Setting the Night On Fire.” Additionally, the song reunites the former tour mates from Chris’ 2018 Losing Sleep Headlining Tour — which included a sold-out hometown show at Nashville’s Bridgestone Arena — and is a full-circle moment since Kane’s first live concert experience as a young Country fan was a Brad Paisley and Chris Young tour stop.
Learn more at  chrisyoungcountry.com  and join him @ChrisYoungMusic on Facebook, Instagram, Twitter and TikTok.

ABOUT CHRIS YOUNG:
Multi-platinum RCA Records Nashville entertainer Chris Young has accumulated an impressive list of accomplishments, including membership in the iconic Grand Ole Opry, nearly 4 Billion on-demand streams, 13 Million singles sold, 11 career No. 1 singles, 21 R.I.A.A. Gold/Platinum/Multi-Platinum certified projects, 2 Grammy nominations, 3 Country Music Association nominations and 4 Academy of Country Music nominations along with a win for Performance of the Year at 2020’s CMT Music Awards. As a prolific creator, Chris has given fans 7 studio albums in 15 years including Losing Sleep, his third project in less than two years. The title track is certified Platinum while “Hangin’ On” is his ninth No. 1 as a songwriter. Losing Sleep (2017) and I’m Comin’ Over (2015) debuted at No. 1 on Billboard’s Top Country Albums Chart with “I’m Comin’ Over” becoming Young’s first 2x Platinum single.

Named “one of his era’s finest traditionalists” by the Associated Press, Chris has quickly become an international ambassador for country music, performing to capacity crowds around the world including the sold-out C2C Festival in the UK. With a hit-packed set that highlights his eleven chart-toppers — including back-to-back No. 1s “Losing Sleep,” “Sober Saturday Night,” “Think Of You,” and “I’m Comin’ Over” — the Grammy and ACM nominated vocalist headlined the Raised On Country World Tour, playing to over 400,000 fans in 3 countries in 2019.