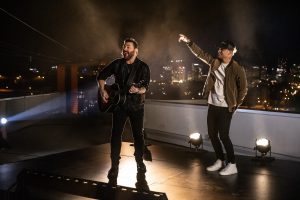 Nashville, Tenn. – March 26, 2021 — Multi-platinum performer Chris Young and 2X 2021 ACM nominee Kane Brown teamed up in the official music video for their top 30 and rising track “Famous Friends.” The pair took part in a live chat with fans last night during the countdown to the clip’s world-premiere on YouTube Music.

True to the song’s sentiment, many of their real-life friends are featured in the music video, including Corry, Brandon and Meagan, plus a live rooftop performance with Chris and Kane while overlooking downtown Nashville. The video is directed by Peter Zavadil/Tiny Terror Productions (Eric Church, Lindsay Ell, Blanco Brown).

“I can’t imagine a more perfect video for ‘Famous Friends’” said Chris. “Peter knocked it out of the park on this one! I had a blast seeing my friends on set, and that rooftop performance with Kane is some of the most fun I’ve had in a video.”

And tune in tonight (3/26) as Entertainment Tonight takes fans behind-the-scenes with Chris and Kane on the set of their “Famous Friends” music video.

Written by Chris with Cary Barlowe and Corey Crowder from a headline tour stop in Tampa in 2018, “Famous Friends” was teased by Chris and Kane on social media last year. The autobiographical song mentions Rutherford County, where Chris grew up in Tennessee, and Kane’s hometown of Hamilton County along with Nashville’s Davidson County.

Billboard declared: “The earworm of the fall and winter is undoubtedly No. 1-bound as these two ‘famous friends’ complement each other perfectly.”

An anthemic tribute to the names, faces, and legendary stories that make up each hometown, “Famous Friends” is Chris and Kane’s first collaboration since working together on Kane’s 2017 song “Setting the Night On Fire.” Additionally, the song reunites the former tour mates from Chris’ 2018 Losing Sleep Headlining Tour — which included a sold-out hometown show at Nashville’s Bridgestone Arena — and is a full-circle moment since Kane’s first live concert experience as a young Country fan was at a Brad Paisley and Chris Young tour stop.

As a prolific creator, Chris has given fans 7 studio albums in 15 years including Losing Sleep, his third project in less than two years. The title track is certified Platinum while “Hangin’ On” is his ninth No. 1 as a songwriter. Losing Sleep  (2017) and I’m Comin’ Over (2015) debuted at No. 1 on Billboard’s Top Country Albums Chart with “I’m Comin’ Over” becoming Young’s first 2x Platinum single. These accomplishments and more landed him in the Top 20 of Billboard’s top country artists of the decade.

Named “one of his era’s finest traditionalists” by the Associated Press, Chris has quickly become an international ambassador for country music, performing to capacity crowds around the world including the sold-out C2C Festival in the UK. With a hit-packed set that highlights his eleven chart-toppers — including back-to-back No. 1s “Losing Sleep,” “Sober Saturday Night,” “Think Of You,” and “I’m Comin’ Over” — the Grammy and ACM nominated vocalist headlined the Raised On Country World Tour, playing to over 400,000 fans in 3 countries in 2019.

A proud alumnus of MTSU in Murfreesboro, TN, Chris celebrated the opening of The Chris Young Café, an on-campus teaching and performance venue for students of the university, on January 27th.  The Chris Young Café also features an eye-catching “Famous Friends” outdoor mural honoring influential MTSU graduates, plus a new Tennessee Music Pathways marker unveiled at the ceremony to mark Young’s success. Chris had also previously created an annual scholarship for recording industry students at MTSU.

ABOUT KANE BROWN: Global entertainer Kane Brown has been called “the future of country” (Billboard), one of the “31 People Changing the South” (Time) and “Breakthrough Artist of the Year” in 2018 (Associated Press). Mixtape Vol. 1, the 5X AMA winner’s first multi-song project in almost two years, dropped August 14 and achieved the best country EP debut of 2020 and highest first-week on-demand stream total since Sam Hunt’s SOUTHSIDE album debut. Mixtape Vol. 1 is nominated for  “Album of the Year” for the 2021 ACM Awards, as the music clip for the EP track, “Worldwide Video,” nominated for “Video of the Year.”

In November 2016, Brown entered the Top 5 of the Billboard Top Country Albums chart with his self-titled 2X Platinum debut album. Brown made history almost a year later as the first artist ever to lead all five of Billboard’s main country charts simultaneously which can be attributed to his 13-week No. 1 Kane Brown Deluxe Version album including the 6X Platinum huge hits “Heaven” and “What Ifs” featuring Lauren Alaina. With the chart-topping Billboard 200 release Experiment  in November 2018, Brown became the only male country artist in more than 24 years to have his sophomore album debut at the top of this chart. The Platinum-certified long-player has yielded three consecutive No. 1 and 2X Platinum singles – “Lose It,” “Good As You” and “Homesick.” Brown’s Mixtape Vol. 1 EP features his newest country solo single, “Worship You,” his Platinum-certified previous country smash, “Cool Again,” and the Platinum-certified No. 7 Top 40 single, “Be Like That,” a collaboration with Swae Lee and Khalid.

On January 9, Brown kicked off 2020 by headlining a sold-out 20 year anniversary celebration show at Staples Center in Los Angeles. Brown then became the 11th country artist to sell-out the world-renowned venue. In November 2020 before over 30 million viewers, Brown performed at AT&T Stadium during the nationally televised halftime of the Dallas Cowboys game on FOX against the Washington Football Team on Thanksgiving Day, kicking off the Salvation Army’s holiday Red Kettle Campaign. On Martin Luther King, Jr. Day 2021, Kane Brown performed during the virtual ribbon cutting ceremony for the National Museum of African American Music located in downtown Nashville. For more information on Kane  Brown, visit KaneBrownMusic.com. 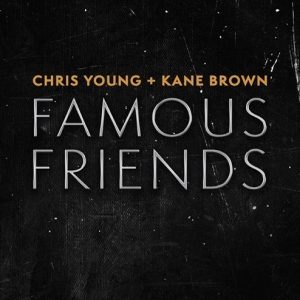