CHASE B UNITES HOUSTON IN “FOR ME” MUSIC VIDEO

CHASE B UNITES HOUSTON IN “FOR ME” MUSIC VIDEO 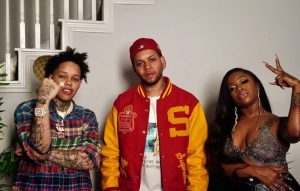 NEW SINGLE “FOR ME” FEATURES OMB BLOODBATH AND KENTHEMAN

Columbia Records recording artist and producer CHASE B has teamed up with rising Houston rappers OMB Bloodbath and KenTheMan on his new single “For Me”. Listen HERE. Bringing life to the popular viral phrase “for me,” CHASE has also premiered the music video for the track today, which features a cameo from Houston legend Slim Thug. The track is already a Houston club staple, as showcased throughout the visual. Watch HERE.

CHASE is nominated once again for Best DJ at the 2020 BET Hip Hop Awards, along with Best Group with the JACKBOYS. CHASE recently celebrated his first #1 single on the BILLBOARD HOT 100 as a producer on “Franchise” with Travis Scott, MIA & Young Thug.

“For Me” is the follow up to CHASE B’s latest release “Cafeteria” featuring Don Toliver and Gunna.

CHASE B has the DJ/producer career many of his peers dream about day and night. Aside from being one of the most in-demand sonic tastemakers, spinning at premium venues from the Vegas strip to South Beach, the Texas native is also the official DJ for hip-hop mega star Travis Scott. His DJ pursuits have now matured into executive producer goals with a debut album due later this year via Columbia Records. His first single “Mayday” featuring Sheck Wes & Young Thug was just a taste of what’s to come, earning him a nomination at the 2019 BET Hip Hop Awards for Best DJ. He wrapped up 2019 with a #1 album on the Billboard Top 200 as part of the Travis Scott Cactus Jack label compilation album, JACKBOYS, which also earned him a 2020 BET AWARD nomination for Best Group. His latest release “Cafeteria” was a collaboration with Don Toliver and Gunna, which CHASE premiered on the first episode of Season 2 of his Apple Music Beats 1 .WAV RADIO show with Travis Scott, where he also announced his joint album with Don Toliver, ESCAPISM is coming soon. CHASE is nominated once again for Best DJ at the 2020 BET Hip Hop Awards, along with Best Group with the JACKBOYS. CHASE recently celebrated his first #1 on the BILLBOARD HOT 100 as a producer on “Franchise” with Travis Scott, MIA & Young Thug. Always ahead of the curve, CHASE linked with rising Houston rappers in his new single “For Me” ft. OMB Bloodbath and KenTheMan. An entrepreneur, CHASE opened a streetwear boutique called Space Village with Travis in their home city of Houston in March 2020. With a fearless ambition, relentless work ethic, and supreme music mind, all assume inevitable longevity for CHASE B. If his trajectory is any indication, more years simply means more wins.

While 2020 was a wild ride for everyone, it was Houston’s own OMB Bloodbath’s pivotal year. The release of “Dropout” with fellow Houston star Maxo Kream fanned the flames for what was to come, as the song cracked the million mark in no time on YouTube. Her hustle paid off, when Blood secured a deal with 10:22 PM and Love Renaissance (LVRN), in partnership with Interscope Records. Raised in H-Town’s Third Ward, Blood has a long history in music, from loving it to later making it. Starting with poems that transformed into rhymes, Blood pounded the pavement, dropping mixtapes like Escape From Section 8 and her Nothing But The Moon series. Her record deal was monumental, as she was the first artist from the Third Ward since Beyoncé to sign a major label deal. With the release of her dynamite follow-up “Bolt,” Blood has already hit 300k in views, and keeps on climbing. With skill, talent, and will, OMB Bloodbath is here to tell real stories to real people.

Heating up Houston’s female hip hop scene, KenTheMan gained early buzz from her hit single “He Be Like” and viral freestyles which all have received millions of streams.  She’s gotten praise from Cardi B, Mulatto, Rubi Rose for her heavy hitting bars. In August 2020 she released her debut EP.