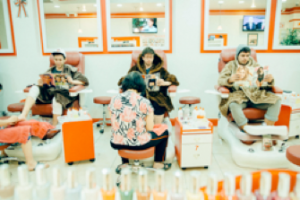 Buy/Listen to the single HERE via Epic Records.

Chopping up lines of funk guitars, island swagger, and atomic pop, the song settles into an addictive audio groove that’s immediately impossible to shake. Rich The Kid and Daniels join the fun with catchy cameos before culminating on the intoxicating chant—“Co-ca-i-na!”

About the song, Ryan McMahon of Captain Cuts shares, “We had just come back from a week of writing in Nicaragua with Daniels and a couple friends. Sitting in our dark studio in L.A., we were imagining ourselves back on the beach in Nicaragua and came up with that acoustic guitar riff and all of the Latin percussion. The vibe definitely felt like the lyric needed to be fun and not serious. So, we started talking about falling in love with a party girl who may or may not be a drug dealer…And ‘Cocaina’ was born.”

It’s been a busy summer for the boys. They performed their debut show at Summerfest on July 4th with The Chainsmokers and produced the new Neon Trees single “Feel Good,” also out today. Stay tuned for the unveiling of the fittingly outrageous and awesome “Cocaina” music video, premiering very soon as well as more surprises from these pop mavericks.

With over 10 million cumulative Spotify streams and counting, “Love Like We Used To” properly introduced the group’s patented “Retro-Future Pop.” Entertainment Weekly called it one of the “100 Best Songs of 2016,” proclaiming, “Good luck trying to sit still.” Idolator described it as “an unashamedly romantic and radio-friendly earworm,” and Fuse dubbed it, “a major tune.” It’s already amassed over 6 million cumulative streams on Spotify so far.

It’s very possible you’ve already sung along to a Captain Cuts song. Since their 2010 formation, the award-winning multiplatinum-certified songwriting, production, and remix team has left an indelible mark on pop music. The lifelong friends and Los Angeles natives co-wrote the inescapable triple-platinum “Shut Up and Dance” with Walk The Moon and wrote and produced Grouplove’s platinum “Tongue Tied,” Halsey’s “Roman Holiday,” Tove Lo’s “Crave,” Bebe Rexha’s “I Got You,” and more as well as songs for Jennifer Lopez, Tegan and Sara, and many others. They’ve also done official remixes for the likes of Britney Spears, Imagine Dragons, and Ellie Goulding, to name a few. The trio broke genre barriers, mashing up turn-of-the-century emo and rock staples from Blink-182, Paramore, and Say Anything with current pop hits from Fetty Wap, Selena Gomez, and Drake on the 2015 mixtape If You’re Listening It’s Never Too Late and earning praise from Los Angeles Times, Rolling Stone, Spin, Billboard, and Alternative Press, along the way. After a meeting with the Epic Records A&R team, the label signed them as artists, kicking off their next evolution.