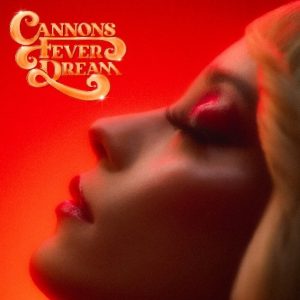 “But every so often, a band breaks through offering something different, fresh, authentic, and cleverly positioned against the grating chug or frustrating generality of the most frequent charters. Lately, that breakthrough rightfully belongs to Cannons” – Consequence

In speaking about the album, Michelle Joy says: “Fever Dream represents everything CANNONS is. There are some lonely songs, some longing songs, and some love songs. Over the last couple of years, writing lifted our spirits and provided a medium to escape reality. These songs kept us going, so I hope people will find a piece of themselves inside of the record. I’ve realized how important it is to feel connected to others and hope this album helps everyone feel a little less alone.”

Following a breakout year in 2020 with their hit “Fire For You,” CANNONS were a mainstay of 2021 with performances at various festivals including Lollapalooza, Life Is Beautiful, Outside Lands, and more. This month, the band kicked off their 31-date North American headline tour with two sold-out shows in Los Angeles and San Francisco, followed by already sold-out stops in Toronto and Vancouver on March 28 and April 19, respectively, before concluding on April 20. Visit https://www.cannonstheband.com/ for tickets and more information.

Cycling through states of mind and fits of feeling, CANNONS ebb and flow between otherworldly electro-soundscapes and evocative vocal transmissions, layering breezy pop atop cinematic sonic architecture. The L.A. group—Michelle Joy [vocals], Ryan Clapham [lead guitar], and Paul Davis [drums, keys]— physically incite body movement and mentally provoke thought. The trio have consistently enabled escape via their songs. Following a tireless grind, they quietly shook-up popular culture with their 2019 independent sophomore outing, Shadows. The single “Fire For You” initially toppled The Hollywood Reporter’s Top TV Songs Chart at #1 in the wake of a placement on NETFLIX’s Never Have I Ever. The success translated to multiple radio formats as they clinched #1 on both Alternative and Triple A, earning them a 2022 iHeart Radio Award nomination for ‘Best New Alternative Artist.’ With the song notably eclipsing 77 million Spotify streams, SiriusXM touted the band on the “Class of 2020,” while YouTube named CANNONS among its “Artists on the Rise.” Beyond inciting critical applause, they wowed audiences at Lollapalooza, Firefly, Outside Lands, and more. After amassing hundreds of millions of streams and earning acclaim from Consequence, OnesToWatch, LA Weekly, and more, the trio captivate like never before on their third full-length offering, Fever Dream [due March 25 via Columbia Records], led by the singles “Bad Dream” and “Hurricane.”