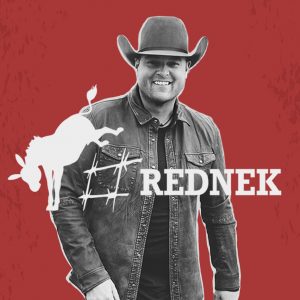 Co-written by award winning, singer-songwriter Buddy Owens, who has penned massive hits with various A-list artists including Bamford (“Leanin’ on a Lonesome Song”, “Where a Farm Used to Be”), “#REDNEK” is a destined to be a certified smash. Proudly referencing everything (almost) that defines the term redneck, Bamford adds another gem to his ever-increasing canon of hit country songs.

Gord Bamford relates, “I have written hundreds of songs throughout my career, but this one might be the best I have penned. Buddy and I definitely dialed it up on #REDNEK”. It took us about an hour to write, which is rare. When the final mix came we were pretty excited. It’s a song you’re going to want to crank up.”

Smoking, drinking, grilling, tractors, NASCAR, pontoon boats, hunting, cut off shorts and camos all get the nod in “#REDNEK”, a story of a modern redneck couple who can mix it up with high society, yet still stay true to their country roots. Look for the accompanying  “#REDNEK” music video later this summer.

To accompany the release of the single Bamford will introduce “#REDNEK”, a hashtag created to develop a unique platform for people who relate to the song to be able to share their version of what being a “#REDNEK is all about through social media.

Gord Bamford, one of Canadian Country Music’s most decorated artists, will introduce the track “#REDNEK” to his massive, dedicated fan base as the headlining act at festivals this summer.

Gord Bamford is one of the most awarded artists in Canadian country music history. He has received 24 Canadian Country Music Association (CCMA) Awards including Album of the Year, Single of the Year and Male Artist of the Year wins, multi Canadian JUNO Award nominations. Bamford is the two-time winner (2013/2015) of Nashville’s Country Music Association CMA Global Country Artist Award, with 25 Top 10 singles in Canada including the #1 smash hits “When Your Lips Are So Close” and “Dive Bar”. Bamford has spent the better part of 20 years honing his craft and perfecting his sound, with his eighth studio album, Neon Smoke, becoming a fan favourite since its release earlier this year.

Gord is a man who believes with his whole heart in giving back. The Gord Bamford Charitable Foundation has generated over $3.6 million since its inception in 2008 for children’s charities such as the Make-A-Wish Foundation, Ronald McDonald House, Big Brothers & Big Sisters, numerous children’s hospitals across Canada and MusiCounts. That humble, likeable approach is what continues to draw legions of new fans to Gord Bamford. But it’s the music that keeps them loyal. Gord Bamford has the amazing ability to evolve his music, sense where his fans want to go, and take us all along with him.