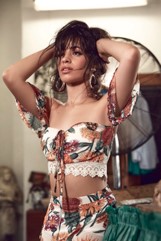 After a hilarious telenovela-inspired dream sequence, the visual plays out like a mini-movie featuring appearances by Latin superstars Lele Pons and LeJuan James alongside the multiplatinum certified pop powerhouse. Camila goes from watching the action play out in a movie theater to scorching a stage in Havana joined by a crooning Young Thug. Directed by Dave Meyers, it’s an event-sized production worthy of the track’s runaway success around the globe!

On iTunes, it clinched #1 on iTunes in 38 countries, including the UK—for two straight weeks—Ireland, Brazil, Mexico, New Zealand, Spain, Portugal, Greece, The Philippines, Singapore, Indonesia, and more. Meanwhile, it’s Top 10 in 88 countries and counting. At Spotify, the single is top 10 in 31 countries, namely the UK, New Zealand, Australia, the Netherlands, Germany, and across Asia.