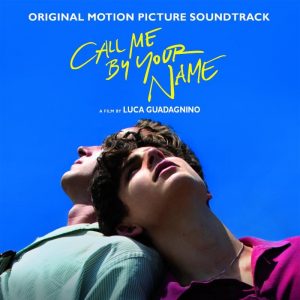 ABOUT THE SOUNDTRACK:
Music is vital to director Luca Guadagnino’s films, but he normally doesn’t hire composers, and instead makes selections from pre-existing music. While the soundtrack for CALL ME BY YOUR NAME is a compilation of tracks by numerous musicians, Guadagnino decided he wanted to approach American singer-songwriter Sufjan Stevens to create a song especially for the film. “An artist for whom I have enormous admiration is Sufjan. His voice is fantastic and angelic, and his lyrics are so sharp and deep and full of sorrow and beauty. The music is so haunting. All these elements were the ones I wanted to envision in the film.”

While Guadagnino knew that Stevens had never collaborated on a movie before, he reached out. Stevens read the book, they had a long conversation, and the result was that he wrote not one, but two original songs for the film: “Mystery of Love” and “Visions of Gideon”. When Stevens’ songs arrived on set a few days before shooting began, Guadagnino invited the film’s stars Timothée Chalamet and Armie Hammer and the film’s editor Walter Fasano over to listen to them at his house. “It was magic,” says Fasano. “A really wonderful moment.” At Guadagnino’s suggestion, Stevens also rearranged one of his earlier songs, “Futile Devices,” for piano for use in the film. “I think Sufjan’s songs add another voice to the film,” says Guadagnino. “They are kind of like a narration without a narration.”

The soundtrack for CALL ME BY YOUR NAME also includes tracks by John Adams and Ryuichi Sakamoto as well as pieces written by Erik Satie, Maurice Ravel and Johann Sebastian Bach. As the film is set in the 1980s, Guadagnino chose period Italian pop music (including Giorgio Moroder & Joe Esposito’s “Lady Lady Lady”) for the radio, but particularly spotlights The Psychedelic Furs’ anthem “Love My Way”. “I love The Psychedelic Furs,” says Guadagnino. “It’s kind of autobiographical, because I remember listening to that song when I was seventeen and being completely affected by it. I wanted to pay homage to myself then.”

ABOUT CALL ME BY YOUR NAME:
CALL ME BY YOUR NAME is a sensual and transcendent tale of first love, based on the acclaimed novel by André Aciman, written by Oscar® nominee James Ivory and starring Armie Hammer (The Social Network) and Timothée Chalamet (Interstellar, Homeland).

It’s the summer of 1983 in the north of Italy, and Elio Perlman (Chalamet), a precocioius 17-year-old American-Italian boy, spends his days in his family’s 17th-century villa transcribing and playing classical music, reading and flirting with his friend Marzia (Esther Garrel).

Elio enjoys a close relationship with his father (Michael Stuhlbarg), an eminent professor specializing in Greco-Roman culture, and his mother Annella (Amira Casar), a translator, who favor him with the fruits of high culture in a setting that overflows with natural delights. While Elio’s sophistication and intellectual gifts suggest he is already a fully-fledged adult, there is much that yet remains innocent and unformed about him, particularly about matters of the heart.

One day, Oliver (Hammer), a charming American scholar working on his doctorate, arrives as the annual summer intern tasked with helping Elio’s father. Amid the sun-drenched splendor of the setting, Elio and Oliver discover the heady beauty of awakening desire over the course of a summer that will alter their lives forever.

ABOUT SUFJAN STEVENS:
A singer-songwriter currently living in New York, NY, Sufjan Stevens’ preoccupation with epic concepts has motivated two state records (Michigan and Illinois), a collection of sacred and biblical songs (Seven Swans), an electronic album for the animals of the Chinese zodiac (Enjoy Your Rabbit), an expansive EP in homage to the Apocalypse (All Delighted People), a full length partly inspired by the outsider artist Royal Robertson (The Age of Adz) and two Christmas box sets (Songs for Christmas, vol. 1-5 and Silver & Gold, vol. 6-10). BAM has commissioned two works from Stevens, a programmatic tone poem for the Brooklyn-Queens Expressway (The BQE) and an instrumental accompaniment to slow-motion rodeo footage (Round-Up), and he has collaborated extensively with the New York City Ballet choreographer Justin Peck (Year of the Rabbit, Everywhere We Go and The Decalogue). Sevens’ Planetarium, a collaborative album with Nico Muhly, Bryce Dessner and James McAlister imbued with themes of the cosmos, was released this year to widespread critical praise.

His 2015 masterwork Carrie & Lowell explored his relationship with his mother in the wake of her death-a companion collection of outtakes, remixes and demos, The Greatest Gift Mixtape, is set for release November 24.

The track list of CALL ME BY YOUR NAME (Original Motion Picture Soundtrack) is as follows: