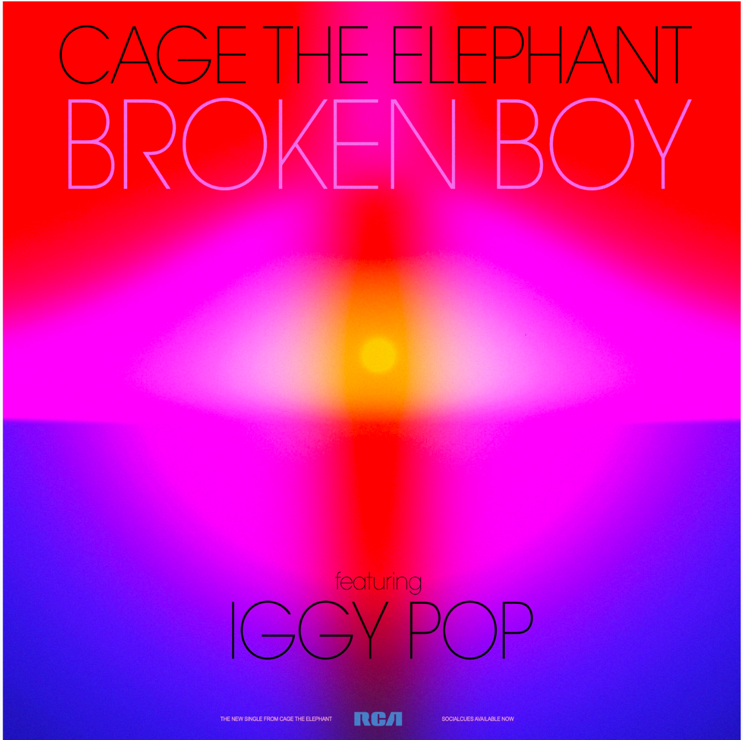 Said Iggy Pop about his collaboration with the band: “Cage is a super high energy outfit, living the Rock dream, so for a couple of fun minutes I was one of the boys. Sounds pretty wicked to me.” Iggy Pop’s latest album Free is out now and available here.

Frontman Matt Shultz spoke of his adoration of Iggy “He’s such a pioneer in so many fields: lyrically, culturally, poetically, visually, musically, and stylistically. Only a couple times in your life do you have the opportunity to share a moment with a visionary and beautiful human as he is. I’m grateful and blown away to have experienced and witnessed, not just his creativity, but also his kindness, humility, and humanness first hand. Such a testimony to the power of love.”

The band’s performance on Austin City Limits, taped at the Moody Theater, will air on January 25th as part of the long running PBS show’s 45th season. During the taping, which The Austin Chronicle said continued the band’s “ascendant rampage into rock & roll history,” the band performed hit songs including “Social Cues,” “Trouble,” “Broken Boy” and “Ain’t No Rest for the Wicked.” Check your local PBS listings for air-times.

Additionally, the band has been nominated for both “Alternative Rock Artist Of The Year” and “Alternative Rock Song Of The Year” for “Ready To Let Go” at the 2020 iHeartRadio Music Awards. The ceremony will take place on Sunday, March 29th at the Shrine Auditorium in Los Angeles, and a full list of nominees is available here.

The band recently wrapped up their two-month long amphitheater “The Night Running Tour” with Beck featuring Spoon in the US. The band announced a UK & European tour in early 2020 that also features SWMRS and Post Animal. See all tour dates below and visit www.cagetheelephant.com for more information.

“After becoming one of rock’s most promising bands, their singer’s life fell apart – and they made their best album yet.” – Rolling Stone (feature)

“Cage the Elephant’s songs unmistakably connect to rock’s past. Its music is studded with sonic and structural allusions, though it doesn’t linger on any particular style or era. And the songs are never simply period pieces or party tunes. The band doesn’t merely understand, and revel in, what a historical anomaly it is. It also has feelings, and shows them.” – The New York Time

“The band’s sound seems more genuine, their strut into personal disorder authentic. Confidence runs throughout this assured album as if the band has finally found a hard-fought consistency. It’s the sound of Cage The Elephant finally uncaged.” – Associated Press

“The album’s introspection paired with its urgent energy make Cage The Elephant sound more passionate than ever.” – Entertainment Weekly

“The rock mainstay has lost none of their edge, expertly balancing gravity, dread, and the chaotic embrace of change against the scratchy guitars and unruly vocals that, even years later, remain indispensable to their signature sound.” – Consequence of Sound

“’Social Cues’ shows the group maturing musically without losing its grip on their ability to craft haunting, accessible tunes ready for the larger venues they have rightfully graduated to.”
– American Songwriter

“Cage The Elephant have proven to be one of the most reliable and entertaining rock bands around and Social Cues has plenty of spectacular music to make it a 2019 Top 10 contender.” – Under The Radar

“’Social Cues,’ a satisfying collection of glitzy anthems, breezy vibes, and even some earnestly introspective highlights that showcase technical and creative maturity amid a continuation of that efficacious recipe.” – Popmatters

“‘Ready To Let Go’ is as sturdy and inviting as anything they’ve ever done, beginning their latest album cycle with a bang.” – Uproxx

“Thanks to this new album, you’ll fall in love all over again with this band.” – San Francisco Chronicle

“‘Ready To Let Go’ does anything but let the viewer go, opting instead to lure curious onlookers in with an intoxicating, blood-spattered strangeness you can’t quite look away from.” – Paste

“Contrary to the song’s title, ‘Ready To Let Go’ does anything but, holding the listener in its intense grip as feelings of paranoia and dread coil ever tighter around your throat.” – Paper