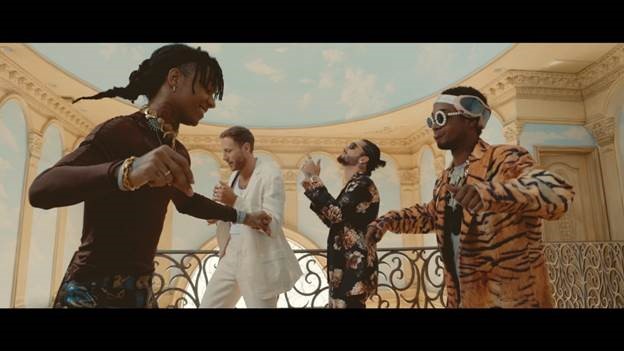 BURNS says about the video; “I’m so happy to be showing this visual to the world. It was a pleasure and privilege to work with some of the most talented people out right now both in front of and behind the lens. Much love to my brother Emil Nava for bringing this to life and to my guys Maluma, Swae and Jxmmi for being a part of something special.”

The Stafford, UK-born and raised and Los Angeles-based artist has quietly become an influential force in pop. His production work encompasses the RIAA Platinum-certified “Make Me…” [feat. G-Eazy] for Britney Spears, and 2018 releases for Hailee Steinfeld, Johnny Yukon, Liam Payne, French Montana, and many more. An in-demand remixer, he’s left his mark on official remixes for Lana Del Rey, Charli XCX, Iggy Azalea, Rihanna, and Drake. Simultaneously, he hosted explosive residencies in Las Vegas, Atlantic City, and Atlanta in addition to igniting stages at Lollapalooza, Made In America, Stereosonic Festival, Tomorrowland, and beyond. Influenced by everything from childhood heroes Daft Punk to A$AP Rocky and Lil Yachty, he veers between electronic expanse, hip-hop energy, and pop power with ease on his forthcoming first solo album and previous single “Far Gone” (feat. Johnny Yukon), which was his first release on RCA Records and quickly crossed the 1 million mark on Spotify. BURNS’ album is inspired by the culture of Los Angeles—his home since 2014. Capturing this spirit, his “LA concept record” represents the idiosyncrasies and intricacies of the city from the requisite romance and rawness to everything in between. As a result, it’s a “mood board” of the place he calls home. By naturally bringing a fresh vibe to pop, BURNS will resonate far beyond the City of Angels…

At only 24 years old, Maluma is widely considered one of the leading voices in Latin music and a bona fide global youth idol. Born Juan Luis Londoño, he formulated his artistic moniker Maluma from the first two letters of the names of his mother, father and sister.

Maluma is one of social media’s most popular artists with over 23 million Facebook fans, 5.1 million Twitter followers, and a whopping 32.2 million Instagram followers (making him the leading Latin male artist on Instagram). His official YouTube/VEVO channel has garnered over 8 billion views and has more than 14 million subscribers, having earned him a YouTube Diamond Play Button Award. With his Maluma World Tour he has achieved unparalleled success, having sold over one million tickets in 105 worldwide concerts in 2017 alone and becoming the top concert-selling Latin artist in the world. In 2015 he released his latest album Pretty Boy Dirty Boy under the Sony Music US Latin label which debuted at #1. In his first year and a half in the U.S. market Maluma garnered five #1 songs on Billboard’s Latin Airplay chart. He is the youngest artist to simultaneously hold both the #1 and #2 spots on Billboard’s Latin Airplay chart (with “Sin Contrato” and “Chantaje”) and only the sixth act to ever achieve the feat. To date Maluma has had seven #1 songs according to Billboard’s Latin Airplay chart.

Mississippi-bred brothers Swae Lee and Slim Jxmmi make up the hip-hop duo Rae Sremmurd. Their third album SR3MM arrives as the follow-up to SremmLife 2—a 2016 album offering the multi-platinum No. 1 hit “Black Beatles” (ft. Gucci Mane). SremmLife 2 drew acclaim from the likes of the New York Times, who noted that “thanks to the more-meditative production, SremmLife 2 is at times a commentary on and an updating of decades of Southern club rap.” Meanwhile, Pitchfork pointed out that tracks like “Black Beatles” “push their talents to new heights by redefining what the duo can and will do.”

Released in 2015, Rae Sremmurd’s first full-length SremmLife debuted at the top of Billboard’s R&B/Hip-Hop Albums and Rap Albums charts, in addition to cracking the Top 5 on the Top 200 Albums chart in its first week. SremmLife also scored Rae Sremmurd five platinum-selling singles, including “No Flex Zone” and “No Type.” 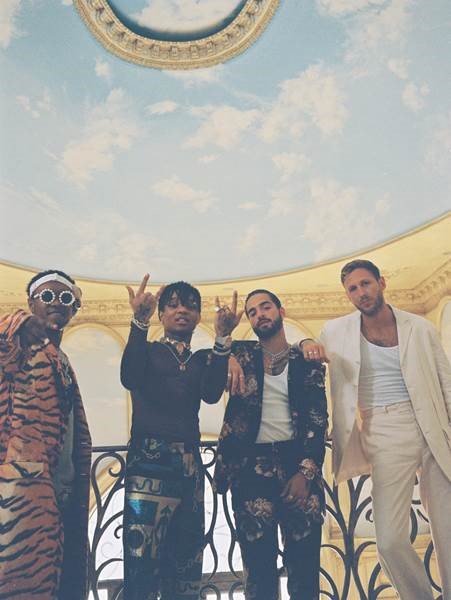 To Buy or Stream “Hands On Me” Feat. Maluma & Rae Sremmurd: