to Be Widely Released by Columbia Records/Legacy Recordings 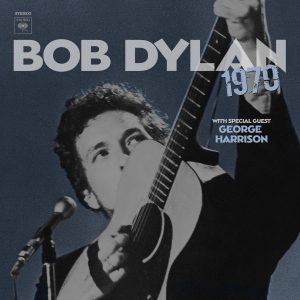 The recordings on Bob Dylan – 1970 were first released in a limited edition on December 4 as part of the Bob Dylan – 50th Anniversary Collection copyright extension series (which began in 2012). The buzz surrounding the 1970 performances, notably Dylan’s studio sit-down with George Harrison on May 1, created a demand for a broader release of these historic tracks.

Bob Dylan – 1970 includes previously unreleased outtakes from the sessions that produced Self Portrait and New Morning as well as the complete May 1, 1970 studio recordings with George Harrison, which capture the pair performing together on nine tracks, including Dylan originals (“One Too Many Mornings,” “Gates of Eden,” “Mama, You Been On My Mind”), covers (the Everly Brothers’ “All I Have to Do Is Dream,” Carl Perkins’ “Matchbox”) and more.

All songs written by Bob Dylan, except: “I Can’t Help but Wonder Where I’m Bound” by Tom Paxton; “Universal Soldier” by Buffy Sainte-Marie; “Spanish Is the Loving Tongue,” “Alberta,” “Come All You Fair and Tender Ladies,” “Things About Comin’ My Way,” “Fishing Blues,” “Honey, Just Allow Me One More Chance,” “Bring Me Little Water, Sylvie,” “Lily of the West” traditional, arranged by Bob Dylan; “Little Moses” by A.P. Carter; “Thirsty Boots” by Eric Andersen; “Come a Little Bit Closer” by Tommy Boyce, Bobby Hart, and Wes Farrell; “Yesterday” by John Lennon and Paul McCartney; “I Met Him on a Sunday (Ronde-Ronde)” by Shirley Owens, Beverly Lee, Addie Harris, and Doris Coley; “Da Doo Ron Ron” by Phil Spector, Jeff Barry, and Ellie Greenwich; “Ghost Riders in the Sky” by Stan Jones; “Cupid” by Sam Cooke; “All I Have to Do Is Dream” by Boudleaux Bryant; “Matchbox” and “Your True Love” by Carl Perkins; “Alligator Man” by Jimmy C. Newman and Floyd Chance; “Jamaica Farewell” by Irving Burgie; “Can’t Help Falling in Love” by Hugo Peretti, Luigi Creatore, and George David Weiss; “Long Black Veil” by Marijohn Wilkin and Danny Dill; and “I Forgot to Remember to Forget” by Charlie Feathers and Stan Kesler.

Produced for release by Jeff Rosen and Steve Berkowitz 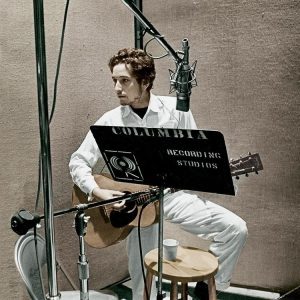