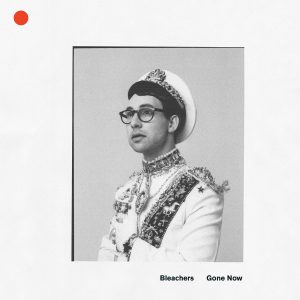 (Toronto, ON)—Today, Bleachers release their highly anticipated sophomore album Gone Now via RCA Records. Bleachers’ first single off of the album, “Don’t Take The Money”, is currently in the Top 10 at Alternative Radio in the U.S.. The band recently performed the song at the outdoor stage on Jimmy Kimmel Live! (Click HERE to watch) and released the music video (Click HERE to watch). In addition to “Don’t Take The Money”, the album includes previously released tracks “Hate That You Know Me”, “Everybody Lost Somebody”, and newly released “I Miss Those Days”

Earlier this week, Bleachers announced the “Gone Now Era – Part 1” headlining fall tour in support of Gone Now. The tour will be making stops in a number of major cities across the U.S. including Nashville, Dallas, and Los Angeles, and will be supported by Swedish singer-songwriter Tove Styrke. This month, Bleachers are scheduled to perform at NXNE in Toronto on June 24th. Tickets for the tour are on sale now and can be purchased HERE.  See full list of tour dates below.

Ahead of the album release, The New York Times put out a glorifying profile piece on Bleachers’ front man, Jack Antonoff.  The article, which appeared in the Sunday edition of the paper, states that the band’s new music is “anthemic, life-affirming pop-rock”. Click HERE to read.

Last month, it was announced that Bleachers will be performing on Good Morning America’s Summer Concert Series on Friday, August 11th on ABC. For more information on how to attend, click HERE.

Jack Antonoff is a three-time Grammy®Award-winning singer, songwriter, musician, and producer, as well as the creative force behind Bleachers. After serving as lead guitarist in multi-platinum band fun., Antonoff launched his solo project Bleachers in 2014 with the critically acclaimed debut album Strange Desire. The album found him setting emotional meditations on anxiety, depression, and loss against a backdrop of earworm melodies and massive choruses on songs like the U.S. gold-certified “I Wanna Get Better” (which topped Billboard’s Alternative chart) and the #3 Alternative U.S. radio hit “Rollercoaster.” Antonoff toured the world for a year and a half in support of Strange Desire, building a cult fan base for his cathartic, suburban influenced anthems. Antonoff is currently gearing up to release Bleachers’ second album on RCA Records. The first single, “Don’t Take The Money,” is out now.

In addition to his work with Bleachers, Antonoff is an in-demand songwriter and producer for other artists, including Taylor Swift (he co-wrote and co-produced three songs on Swift’s Grammy®-winning album 1989 including out of the woods), Sara Bareilles (co-writing her Grammy®-nominated hit “Brave”), Zayn (co-writing and producing his No. 2 Hot 100 duet with Taylor Swift “I Don’t Wanna Live Forever”), Sia, Tegan & Sara, Carly Rae Jepsen, Troye Sivan, Grimes, and, most recently Lorde, having co-written and co-produced her new single “Green Light” and her highly anticipated new album, Melodrama.

Antonoff also founded and curated the annual “Shadow of the City” music festival, which takes place in Antonoff’s home state of New Jersey in the parking lot of the Asbury Park Stone Pony. In addition, this year Simon & Schuster will publish Antonoff’s first book, Record Store — a heavily illustrated anthology of essays, interviews, photographs, and ephemera that will pay tribute to the cherished and endangered cultural institution.

Antonoff is also a passionate advocate for Planned Parenthood and LGBTQ rights, having recently collected signatures from 142 high-profile artists, writers, and creators to deliver a message to legislators in Texas considering anti-LGBTQ laws. He is a co-founder of The Ally Coalition (TAC), which encourages allies of the LGBTQ community to take action for LGBTQ equality and support its causes. TAC has raised hundreds of thousands of dollars over the last few years for local LGBTQ homeless shelters around the US.