The single follows the announcement of his highly anticipated album

Kicks off headlining ‘nothing matters tour’ this September – 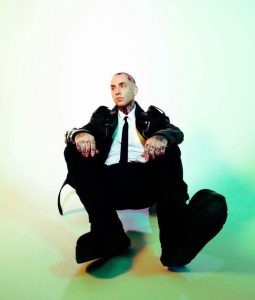 Today, multi-platinum selling singer, songwriter, and producer blackbear releases his new single, “toxic energy” featuring Bert McCracken from The Used via beartrap/ALAMO/Columbia Records. Teasing his forthcoming sixth studio album with the deeply personal track, blackbear displays his internal struggle of feeling disconnected from a toxic situation, and with this track, he explores his most authentic sound. Click HERE to listen and watch the lyric video HERE.

“toxic energy” is a love letter to that toxic person that you have reached your limit on,” blackbear shared.” It’s when you’re done babysitting and giving your heart away and you need to take time for yourself. This person lifts you up like cocaine but drops you in the dark like a lightning storm, the only way out is inward, enjoy.”

“toxic energy” is the third single released from his forthcoming album in loving memory, due August 26th. While gearing up to release the project, blackbear has teased what’s to come with multiple tracks including lead single, “gfy” featuring multi-platinum selling superstar Machine Gun Kelly. The track has been streamed over 23M times worldwide while the star-studded video featuring Kelly, Aisha Mian, Benny Blanco, Mike Posner, and August Maturo has garnered more than 5.3M+ YouTube views to date. blackbear followed it up with “the idea” which served as the inspiration for the forthcoming album, after recording it with Travis Barker in 2021 he knew he needed to lean into his pop-punk and emo beginnings and create an entire album giving him that same feeling of nostalgia.

This fall, blackbear will take his music on the road with his recently announced ‘nothing matters tour’, his first headlining tour since 2019. Produced by Live Nation, the tour will feature 15 exciting dates in North America showcasing the entertainer’s forthcoming sixth studio album, in loving memory. For complete ticket and pre-sale details visit https://beartrap.la/pages/tour.

Since first crashing onto the scene in the mid-2010s, blackbear has defied all expectations, effortlessly mixing his hedonistic hellraising and maniac humor with deeply heartfelt emotion. Delivering an outrageously catchy hybrid of pop and hip-hop and alt-R&B, the L.A.-based artist has released five studio albums in the last six years alone, including 2019’s magnum opus ANONYMOUS, and 2020’s gold-certified everything means nothing which rose to #15 on the Billboard 200 Chart. The first glimpse at his latest metamorphosis, the fantastically zeitgeisty anthem “hot girl bummer” dropped in August 2019, reaching #5 at Top 40 radio and earning platinum certification from the RIAA—eventually emerging as blackbear’s most successful smash since 2017’s double-platinum “do re mi.”

Establishing himself as one of the most sought-after artists for collaborations in the industry, blackbear has recently been featured alongside Travis Barker on Avril Lavigne’s newest song, “Love It When You Hate Me” which has been nominated for a 2022 MTV VMA for “Best Alternative,” Machine Gun Kelly’s “make up sex” and All Time Low’s “Monsters” which took home this year’s iHeartRadio Music Award for “Alternative Song of the Year.” In 2021, he collaborated with Machine Gun Kelly on their hit single titled “my ex’s bestfriend” which received the MTV Video Music Award for “Best Alternative Video” and spent multiple weeks #1 at radio.  He’s produced and written hit songs for leading artists in the music industry such as Billie Eilish, Ellie Goulding, Maroon 5, G-Eazy, Justin Bieber, Kane Brown and Charlie Puth.