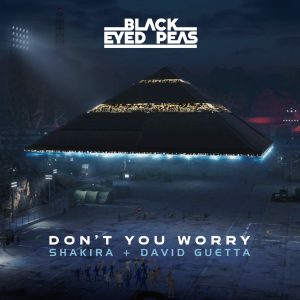 Today, six-time GRAMMY® Award-winning, genre-bending pioneers Black Eyed Peas return with a blockbuster new single entitled “Don’t You Worry” [with Shakira & David Guetta] via Epic Records. Listen to “Don’t You Worry”—HERE. This is the second time the Black Eyed Peas and iconic Colombian singer-songwriter and multiple GRAMMY® and Latin GRAMMY® winner Shakirahave worked together. Their last collaboration, “GIRL LIKE ME,” picked up a platinum certification in Canada and has amassed over half-a-billion streams WW, unlocking unprecedented creative chemistry in the process. The single also reunites Guetta and the Black Eyed Peas who first collaborated in 2009 on the global #1 smash “I Gotta Feeling”.

“Don’t You Worry” sees Black Eyed Peas, Shakira, and Guetta level up together on the kind of international banger meant to eclipse genre lines and borders. They each bless the track with a signature flavor, uniting for an undeniable summer anthem that’s as hot as it gets. The music video, by Director X seamlessly translates this energy to the screen. Watch the video— HERE.

Additionally, “Don’t You Worry” was specially previewed to fans for a 48 hour pre global release window in Beatstar, the hit music rhythm game, boasting 30M+ installs since launch in September 2021. Beatstar has already licensed and released earlier Black Eyed Peas songs and is an ardent supporter of the group. Beatstar has started releasing brand new songs on global release day in partnership with select artists, the “Don’t You Worry” partnership took things a step further! “With 500K players collecting the song in its first 24 hours of release in Beatstar, we are privileged to have contributed to launching this amazing Summer anthem.”- Simon Hade, Co-Founder Space Ape Games

During 2020, Black Eyed Peas revealed their international epic album Translation after an eight year hiatus. It soared to #3 on the Billboard Top Latin Albums Chart and boasted ,multiple Platinum certifications in Canada including 3X Platinum with “RITMO (Bad Boys For Life)” [w/ J Balvin], 2X Platinum for “MAMACITA,” and the platinum-selling “GIRL LIKE ME” [with Shakira].Variety summed it up by declaring, “BEP have found a new sense of adventure.”

Get ready for the next era of Black Eyed Peas now.

With every move, Black Eyed Peas dictate the rhythm of culture. During the past 25 years, the Los Angeles trio—will.i.am, Apl.de.Ap, and Taboo—earned six GRAMMY® Awards and achieved sales of 35 million albums and 120 million singles across seminal releases such as Elephunk, The E.N.D., and more. Cemented as one of the era’s biggest acts, they emerged as “the second best-selling artist/group of alltime for downloaded tracks,” according to Nielsen, and landed on Billboard’s “Hot 100 Artists of the Decade.” Moving over 3 million tickets, performing 300-plus shows throughout 30 different countries, and headlining stadiums, they graced the biggest stage in the world with a landmark performance at the Super Bowl XLV Halftime Show in 2011. They ignited a new era with the 2019 single “RITMO (Bad Boys For Life)” alongside J Balvin, generating over 1 billion combined streams and video views in under six months’ time. Impressively, it toppled the Spotify streaming counts of classics like “I Gotta Feeling” and “Where Is The Love?” to emerge as the group’s “most-listened to song on a platform.” It ascended to Top 10 at Pop Radio, becoming their “first Top 10 at the format in a decade.” The follow-up single “MAMACITA” [with Ozuna & J.Rey Soul] only accelerated the ascendancy of Black Eyed Peas to total cultural dominance, eclipsing half-a-billion streams. Everything just paved the way for their eighth album Translation to make a major splash around the globe. It arrived with a bang worldwide, bowing at #3 on the Billboard Top Latin Albums Chart as the group’s first Top 5 entry. Beyond tallying billions of streams and counting, “RITMO” earned a double-platinum certification from the RIAA as “MAMACITA” and “GIRL LIKE ME” [with Shakira] each surpassed gold status. Translation generated widespread critical applause as Variety proclaimed, “BEP have found a new sense of adventure.” Black Eyed Peas continue to move culture with intensity like never before.

Shakira is a Colombian singer-songwriter and multi-GRAMMY® award winner.  She has sold over 80 million records worldwide and has won numerous awards including three GRAMMYs®, twelve Latin GRAMMYs®, and multiple World Music Awards, American Music Awards and Billboard Music Awards, to name a few.  She is the most-viewed Latin artist, and one of the top-10 artists overall of all time on YouTube with over 20 billion cumulative views, and the most-streamed female Latin artist of all time on Spotify. Shakira’s last album “El Dorado” charted #1 on iTunes in 37 Countries, won Best Pop Vocal Album at the 2017 Latin GRAMMY® Awards, and Best Latin Pop Album at the 2018 GRAMMY® Awards. With over 10 billion streams, it is one of the most-streamed female albums of all time. In November 2018 she wrapped her hugely successful El Dorado World Tour. Shakira’s Super Bowl LIV performance garnered 4 Emmy Nominations and has also become the halftime performance with most YouTube views of all time at over 230 Million. She is currently recording her next studio album and recently launched a new dance competition show as both executive producer and part of a celebrity panel on NBC called Dancing With Myself, which premiered May 31st.

Musical trailblazer David Guetta is an international icon. Receiving his 10th GRAMMY nomination in 2021 for ‘Hero’, his collaboration with Afrojack, Guetta was also nominated for 3 Brit Awards, voted the world’s best DJ in the coveted DJ Mag ‘Top 100’ poll and the best electronic artist at the MTV Europe Music Awards. He also won the award for Dance Act of the Year at the 2022 iHeartRadio Music Awards, capping off another incredible 6 months for the dance music visionary with a total of 3 awards, as well as being nominated for 1 award at this year’s Billboard Music Awards.

Skyrocketing to the #9 most streamed artist on Spotify globally while maintaining an epic level of quality for his live streams during the pandemic and lockdown, he hosted his iconic United At Home series, a number of unforgettable concerts from Paris’ Louvre Museum, the Burj Khalifa in Dubai, the Icon Brickell in Miami, and atop the Rockefeller Center, raising $2 million in donations for numerous charities. With clubs and festivals finally open, Guetta performed an exceptional set at Ultra Music Festival in Miami, just finished his Residency at Encore Beach Club in Las Vegas and will be appearing at more of the world’s biggest festivals and events over the summer. In Ibiza, he has began his 2 residencies a week for 4 months: Fridays at Hï Ibiza with Future Rave and Mondays at Ushuaïa with his legendary party F*** ME I’M FAMOUS.

So far in 2022 he has released a variety of collaborations including his remix of Dua Lipa and Megan thee Stallion’s ‘Sweetest Pie’ and a unique street house remix of Kodak Black’s smash hit ‘Super Gremlin’, which saw him venture further into the hip-hop world. To round off an impressive first quarter of the year he has released new single ‘What Would You Do’ with Joel Corry and huge hit ‘Crazy What Love Can Do’ with Becky Hill and Ella Henderson.

A master creative across genres, Guetta has gone from strength to strength with his underground-focused Future Rave project alongside Morten, releasing the atmospheric ‘Permanence’ as his first single of 2022. Additionally he returned to his uncompromising Jack Back alias for ‘Feeling’. Celebrating 10 years of his massive ‘Titanium’ collaboration with Sia, Guetta released new remixes, including a mind-blowing Future Rave version.

With over 14 billion global streams, 50 million records sold worldwide and two Grammy awards to his name, David Guetta demonstrates time and time again why he is the most cherished electronic artist of our generation.