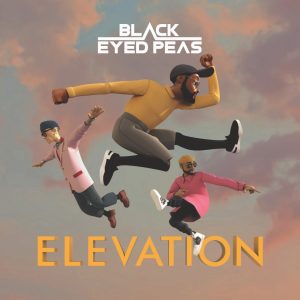 The 15-track juggernaut kaleidoscopically spins together hip-hop, Latin, R&B, electronic, trap, and more into a larger-than-life vision of what pop can be in the 21st century without boundaries or borders. From the jump, uncontainable energy surges through this bold body of work.

“MUEVELO” [feat. Anuel AA & Marshall Jefferson] glides along on bright keys and big handclaps offset by robotic transmissions, a command to “Move your body,” and a promise “We stay lit forever.”  Elsewhere, “Dance 4 U” hinges on a slick bass line and punchy groove. The sample on “Jump” predicts the reaction perfectly, “Somebody said when you play this song all the girls will go loca.” The kinetic stomp of “Firestarter” leaves flames in the wake of its incendiary vocals. The group shine brighter than ever.

Black Eyed Peas teased out ELEVATION with “SIMPLY THE BEST” [with Brazilian global pop superstar Anitta & El Alfa]. It has already generated over 2.9 million Spotify streams and 18 million YouTube views on the music video. Earning critical acclaim, mxdwn asserted, “‘Simply The Best’ acts as clear proof to fans that Black Eyed Peas remain just as capable of creating fun and energizing party tracks as they have been since their 1995 formation,” and That Grape Juice fittingly summed it up as “a global affair.”

Right out of the gate, “SIMPLY THE BEST” rides luminous dancefloor-ready keys towards a chantable chorus, “No it don’t get better than, better than this.” Black Eyed Peas, Anitta, and El Alfa trade verses back and forth, unlocking undeniable and unbreakable chemistry. At the same time, Anitta infuses the track with Brazilian swagger, El Alfa turns up with Dominican Republic flavor, and Black Eyed Peas exude laidback Los Angeles confidence in between these global rhythms. The visual continues a tradition of larger-than-life videos for the group as well. Once again, they pull out all the stops.

ELEVATION finds Black Eyed Peas expanding the collective musical consciousness and pushing boundaries yet again (like only they can). Of course, they bring a few friends along for this rollercoaster ride. The group link up with Daddy Yankee on the reggaeton banger “BAILAR CONTIGO,” while Nicky Jam ignites the funkified “GET DOWN” with fresh fire. Then, there’s “FILIPINA QUEEN” where they team up with J. Rey Soul and deliver an inimitable and irresistible bop. Nicole Scherzinger lends her powerhouse pipes to “NO ONE LOVES ME,” and Black Eyed Peas and Ozuna close out the album together on the universally-resounding “L.O.V.E.”

They initially teased ELEVATION with the international smash “DON’T YOU WORRY” [with Shakira & David Guetta]. It has already gathered more than 111 million Spotify streams and 113 million YouTube views on the music video. Meanwhile, it catapulted into the Top 40 at AC, in the Top 30 of the iTunes Top Pop Songs Chart, and Top 50 of the Shazam U.S. Top 200. Beyond recent acclaim from Billboard, NME, and more, the group also recently performed on ABC network’s Good Morning America’s Summer Concert Series in Central Park.

It is ELEVATION season for Black Eyed Peas. Join them on the next level!

13. NO ONE LOVES ME (feat. Nicole Scherzinger)

Black Eyed Peas continue to fulfill a master plan to push the game forward devised way back in 1995. They execute each stage of this plan with focus and intent, allowing their evolution to play out in real-time over a series of game-changing albums, beginning with Behind The Front [1998] through Bridging The Gap [2000], Elephunk [2003], Monkey Business [2005], The E.N.D. [2009], The Beginning[2010], Masters of the Sun, Vol. 1 [2018], and, most recently TRANSLATION[2020]. Along the way, co-founders will.i.am, Apl.de.Ap, and Taboo have set music industry records that will probably never be exceeded, moved north of 35 million albums and 120 million singles, gathered six GRAMMY® Awards, and headlined the Super Bowl, the World Cup, and F1 races. The multi-platinum group launched the comeback of the decade after eight years of dormancy. The future matters the most to these trailblazers, which brings us to their 2022 blockbuster ninth full-length, Elevation [Epic Records]. The 15-track opus represents another logical step and the dawn of a new phase, boasting the smash “DON’T YOU WORRY” [feat. Shakira & David Guetta] and collabs with Daddy Yankee, Nicky Jam, Anuel AA, Ozuna, Nicole Scherzinger, and more.

About the record, will.i.am comments, “We were behind the front, then we bridged the gap. We rode an elephant’s back to realize the industry was full of monkey business. That was the end, but the end is new beginnings. Becoming masters of the sun, mastering the industry, we realized we had to have translation in this complex world. But we be falling up, and never falling down. Black Eyed Peas is known for elevation. This is the next stage for us, reaching higher.”