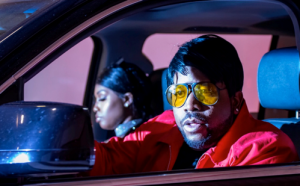 The clip plays out like a movie. Swagged-out in red head-to-toe like an O.G. player, “Daddy Fat Sax” pulls up in a classic ride with four lovely ladies on the way to a “video shoot.” After this hilarious intro, “Chocolate” ramps up into slick and sexy vignettes edited to flow seamlessly with the danceable groove and booming hook—“cho-co-late.” There’s no song more rich and delicious right now!

Given that style, it’s no surprise Dave Chapelle picked the video to play during his intermission.

One of history’s tightest and most clever rhyme mavericks, Big Boi‘s indelible influence courses throughout two generations of rap music. As one-half of OutKast, he achieved seven GRAMMY® Awards, sold 25 million records, and created a string of music’s most influential work, including Aquemini, Stankonia, Southernplayalisticadillacmuzik, and Speakerboxxx/The Love Below—which went RIAA Diamond making OutKast the first and only hip-hop artist in history to win the GRAMMY® for ‘Album of the Year.‘ Big Boi’s 2010 solo debut, Sir Lucious Left Foot: The Son of Chico Dusty, bowed at #3 on the Billboard Top 200 and received unanimous critical acclaim with Pitchfork proclaiming it one of the “100 Best Albums of the Decade ‘So Far'” and topping year-end lists from Time, Paste, Vibe, and more.