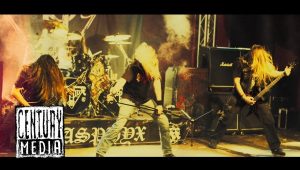 Today, ASPHYX are pleased to reveal the album’s first single “Botox Implosion”, which can be checked out in a video filmed by Maurice Swinkels / Younique Film (Legion Of the Damned, Exodus, Kataklysm, etc.) HERE!

ASPHYX frontman Martin van Drunen checked in about the song and its video as follows: “ We actually wanted to film this on Sunset Boulevard LA, where most of the pathetic subjects of this song have their residence, but due to the pandemic it was best not to fly over to the USA. So since it’s a fast shredding and written in the typical humorous death metal gore tradition track, we put a few laughable elements in it. Fortunately good old Turock in Essen was so friendly to let us film there and where we’re usually not that keen on shooting videos, with this one we had quite some fun. Still, it is a helluva brutal tune!”

“Necroceros” was recorded at Tom Meier’s Tom Meier Studio as well as at Paul Baayens’ The Mörserstudio and then finally mixed/mastered by Sebastian “Seeb” Levermann at Greenman Studios. The album once again features front cover artwork by Axel Hermann and contains the following tracklisting: 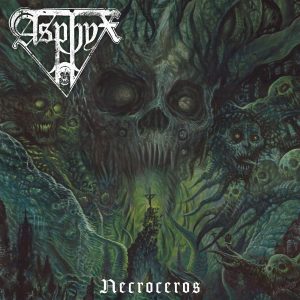 “Necroceros” will be available in the following formats:

The limited Mediabook CD edition comes with an expanded booklet of 40 pages as well as the Bonus DVD “30 Years of Death Doom Domination”, with over 2 hours of playing time. The DVD contains 2017’s special ASPHYX live-show for their 30th band-anniversary with raw and pure camera-sound, as well as rehearsal footage and interviews with all current and former band members who attended this remarkable event.

The strictly limited Deluxe 2LP version of “Necroceros” is available either as dark green-yellow-white splattered vinyl (Limited to 500x copies via CM Distro or the band) or as white-black marbled vinyl (Limited to 500x copies available from Nuclear Blast). Next to the “30 Years of Death Doom Domination” Bonus DVD, this Deluxe format of the album will come in Gatefold packaging with a bonus 12” vinyl, featuring 2 bonus-tracks (“Full Death Metal Scenario” and “Triple D”) on side C and an Etching on side D. This edition also includes the double-sided A2 poster, an exclusive LP booklet of 24 pages as well as an originally signed ASPHYX photocard.

The album’s LP version will come on 180g vinyl and with a double-sided A2 poster in the following variations and limitations:

* Please note that the US versions of the LP will be available as of February 12th, 2021.

The pre-order for “Necroceros” in all its various formats starts today HERE!

And many more to be announced soon… 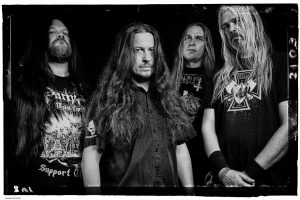