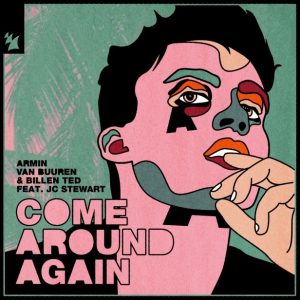 April 8, 2022 – While recent tracks such as ‘Human Touch’ (with Sam Gray) and ‘Love We Lost’ (with R3HAB, feat. Simon Ward) are still on everyone’s lips, electronic music icon Armin van Buuren is already stepping up again with a collab of considerable magnitude. A joint effort with London-based, platinum-selling production duo Billen Ted and globally renowned singer-songwriter JC Stewart, ‘Come Around Again’ comes with a bespoke music video and could very well be the Grammy-nominated Dutchman’s biggest hit of the running year.

‘Come Around Again’ was premiered two weeks ago by Armin van Buuren, Billen Ted and JC Stewart at Ultra Music Festival in Miami and flaunts their knack for writing songs that could rule charts. The song’s official music video, which syncs the track’s resonating lyrics and innate club appeal with striking visuals, was also shot in Miami and will be premiered via YouTube on Saturday, April 9 at 1 p.m. (CEST). For YouTube premium users, there will also be a YouTube Afterparty on Thursday, April 14 at 5:00 PM (CEST), in which Armin van Buuren and JC Stewart answer questions from fans about their collaboration.

“What I like so much about ‘Come Around Again’ is that it has a little bit of everything”, Armin van Buuren says. “It has the drive it needs to energize dance floors and also has the lyrical depth and poppy hook to make due on radio and in playlists. I’m super happy with this collab and loved working with Billen Ted and JC Stewart. They really inspired me in the studio!”

“We loved working on ‘Come Around Again’ with Armin and JC”, Billen Ted add. “We premiered it at Ultra and it went off, so we’re looking forward to having it out in the world.”

“From writing it in a beautiful house in Cornwall to debuting it on the Ultra Miami main stage, working with Armin and Billen Ted on ‘Come Around Again’ has already been a dream come true”, JC Stewart says. “I can’t wait to see people dancing to it all summer!”

Armin van Buuren has long been a global ambassador for electronic music. The five-time #1 DJ in the world and current #3 has seven full-length artist albums to his name and continues to cultivate a massive worldwide following through his weekly A State Of Trance radio show, event series and album series, reaching 40 million listeners from 80 different countries on a weekly basis. In non-COVID times, Armin van Buuren headlined more than 150 shows per year at leading festivals and venues around the world, including Electric Daisy Carnival (Las Vegas, New York), Ultra Music Festival (Miami) and Tomorrowland (Belgium) plus residencies on Ibiza and in Las Vegas.

Working out of Ealing Studios, London, Billen Ted are a hit artist, production and writing duo who’ve effortlessly and successfully made the transition from death metal to dance and pop music in the past few years. Their platinum-selling remix of Nathan Evans’ ‘Wellerman’, became one of the biggest domestic UK hits of last year, spending two weeks at #1 and fourteen consecutive weeks in the Top 10 of the UK Singles chart. The song also

Whether you’re looking at significant support (his first MTV nominations at both the VMAs and EMAs, plus long-running support from Radio 1, Spotify and Apple Music), star collaborators (Lewis Capaldi, Niall Horan, Tom Odell and 220 KID) or stats (200 million+ streams) fueled by international hits such as ‘I Need You To Hate Me’ and ‘Too Many Nights’, JC Stewart is in the ascendancy. Factor in classic songwriting with a pop appeal, an emotive heart and a world-class vocal gift, and one thing becomes abundantly clear: the young Northern Irish artist is set to become a very big deal indeed in 2022.