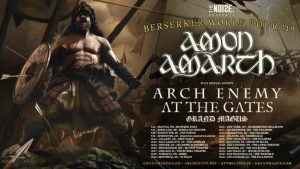 “Berserkers! We will lead a Swedish metal invasion of North America this September and October along with our friends Arch Enemy, At The Gates and Grand Magus,” Amon Amarth say. “Come fight and feast with us and earn your seat in the great golden hall. This raid is pure heavy fucking metal and not to be missed!”

Arch Enemy guitarist Michael Amott adds, “Arch Enemy is very much looking forward to invading North America together with Swedish Viking kings Amon Amarth and our Metal brothers in At The Gates and Grand Magus! Miss this Swedish Heavy Metal apocalypse at your own peril!”

Grand Magus’ JB concludes, “I would say that epic is the most fitting word to describe this happening. It’s an honour to be part of this gathering of metal giants and we will do our damnedest to make it a memory for life for all who will bang their heads with us during this adventure!”

Arch Enemy continues to tour in support of their 2017 chart-topping tenth full-length album Will To Power released by Century Media Records. Will To Power is available for purchase HERE. A new re-press of Will To Power as a limited edition “Tour Exclusive” yellow with red swirls vinyl will be available for sale at the merch booth doing the tour. The band is currently working on their new album. More details to will be announced shortly.

Released in 2017, Arch Enemy’s tenth album was the ultimate statement of heavy metal supremacy from a band that are still growing in stature year over year. The critically acclaimed album is the first the band recorded with their current line-up: Alissa White-Gluz (vocals,) Michael Amott (guitars,) Jeff Loomis (guitars,) Sharlee D’Angelo (bass,) Daniel Erlandsson (drums). Achieving longevity is the toughest challenge that faces any band, but Arch Enemy have long since established themselves as a permanent fixture on the global metal scene and continue to uphold and celebrate the heavy metal code. 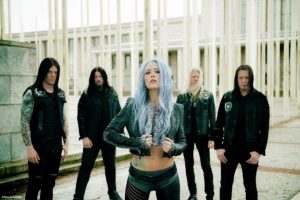